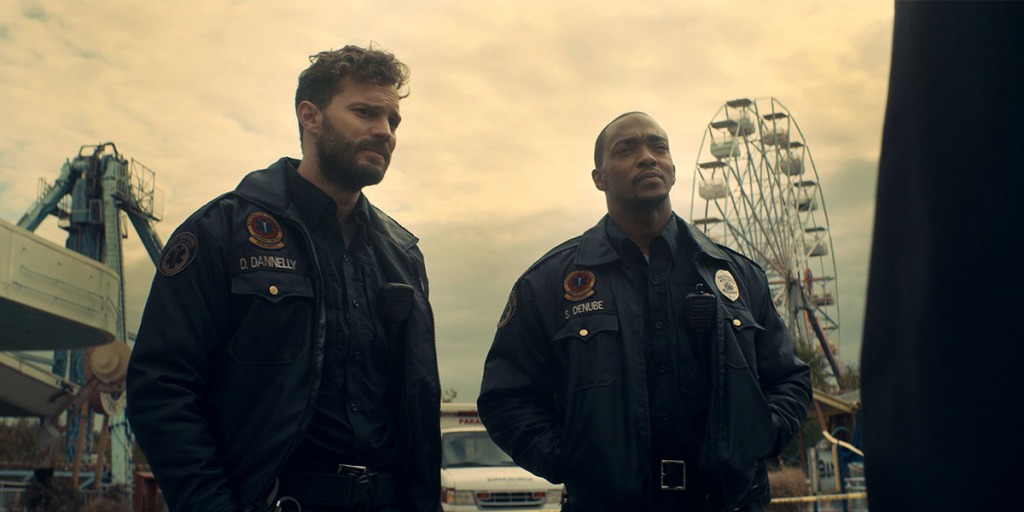 Leading up to May of 2015, I kept hearing about a film called Spring, and it was described as Lovecraft meets the Before trilogy. Anybody who knows me should know this is a film calling my name. I remember missing out a screening of Mad Max Fury Road to see both Justin Benson and Aaron Moorhead introduce Spring at a screening in Toronto. Even when the fire alarm went off in the theatre, I still hold that screening close to my heart. In a way, without Spring, there wouldn’t be no Film Queue or no UnderSCENE, or even a version of me who has fallen for film criticism. I have followed their growth as I’ve tried to grow as a writer, and that’s why it pains me to say that Synchronic was their first big-budget film was a (minor) miss.

Synchronic follows Steve (Anthony Mackie) and Dennis (Jamie Dornan) as paramedics who are very close friends. One day during work they show up at what was supposed to be a typical overdose but turns and spirals into something far more bizarre and unique. People have begun dying from a synthetic drug known as, you guessed it, synchronic. Designer drugs take typically illegal drugs and change a few molecules in order to allow them to be while not FDA approved, legal by default. With synchronic, the molecule that was changed becomes a way to alter time and see time as it in a different light. The victims that have been found aren’t dying due to their overdose but a rather different side effect of the drug.

The core science of the film relies on your belief and understanding that time is not linear, but rather pockets of time and for the case of this film, where you’re standing geographically. There is no past, present, and future, time just is. And we bounce back and forth in the film in fun experiments that occasionally want to rip my heart out.

The film builds until one day Dennis’ daughter Brianna (Ally Ioannides) goes to a party and takes synchronic and then vanishes. And after Steve experiments with the drug, is the only one aware of knowing where she might be. Add on top of that that Steve is recently diagnosed with terminal cancer, the time is ticking and becomes the only person who can save her, thanks to the same tumor that helps him see life in a different way.

Dennis is a man who has doubts about his relationship and constantly complains to Steve about them, who is constantly looking for a relationship more stable. While he’s stuck in a rut of constant hookups, he yearns for family life and settling down. Steve gives a monologue about how all these doubts don’t mean anything when you can see the end, and it rings heartbreakingly true. Unfortunately, I never fully bought the chemistry between Mackie and Dornan, not always. And the film tends to rely on it.

The first half of the film has pacing issues – it’s both too slow and too fast – but the second half where the film starts to shine as Mackie is given more time to shine as well. The truth is, it’s not perfect and feels like lesser work in comparison to their previous films, but I love the weirdness and the oddity’s that Benson and Moorhead usually excel in. There’s an honesty that I feel radiating off their films that I don’t often find in other films. I’ll keep observation number three in my heart for a long time, I won’t be late, and I won’t be late for their next works. Whatever they have up their sleeves and in their hearts (both are visibly etched onto their arms like the tattoo’s on Benson’s arms) is something I can’t wait to witness again.