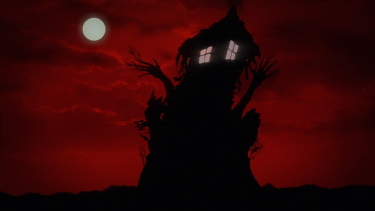 When I think of horror films I usually think of a fairly simple structure, a couple jump scares, maybe some cool creature effects, that sort of thing. What I don’t think of is old school hollywood musicals and mugging to the camera while at the same time still shocking you with an uncomfortable atmosphere. This is exactly how the Japanese 1977 film Hausu (House) made me feel and more. For those horror fans who have never had the pleasure of viewing this wacky masterpiece I am about to describe the indescribable and there is no way I will be able to do this film justice. My honest advice is to get some friends together and experience Hausu for yourselves but for now you’ve made it this far and you’re stuck with me.

Our story is an incredibly simple one on paper. Gorgeous, a Japanese schoolgirl and her six friends Fantasy, Sweet, Mac, Prof, Melody, and Kung-Fu (I know, the best name ever and my personal favourite character) all go to Gorgeous’s Aunt’s house in the Countryside for the summer where all manner of macabre activities begin to happen as the girls try to unravel the crazy that is happening in the house.

Nobuhiko Obayashi directs Hausu beautifully with a unique style of live action, black and white cinema, animation and stop motion creating one of the most uncomparable film experiences I have ever seen. Seriously, there is almost nothing like it except for maybe Italian Giallo horror cinema like Dario Argento’s Suspiria, but even those films are presented as spooky nearly all the way through. The opening shots of Hausu give you just the smallest hint of what you’re in for with Gorgeous and Fantasy performing a sepia toned photoshoot but almost nothing actually meant to be overtly scary happens for almost the next 45 minutes! That may sound boring to some but the film still has a strange level of discomfort permeating through its first half, accented by its beautiful but still noticeable matte paintings that break right through the uncanny valley. What it doesn’t hint at is the insanity that befalls the girls when they get to the house! By today’s standards House might not be the scariest movie ever made but its unpredictability and style will have you staring open-mouthed one minute and laughing the next. This is a film with piano’s that devour, floating decapitated heads and even aggressive firewood attacks. See it to believe it!

Another one of House’s greatest assets is it’s haunting soundtrack by Asei Kobayashi and Mickie Yoshino. The main theme song of the movie is a subtle lullaby that begins as a tune of hope and evolves into one of despair and it absolutely will stick with you after the film. Most of the rest of the soundtrack is upbeat and jazzy which is a hilarious contrast to what you’re looking at for most of the film.

Hausu is a film that is difficult to talk about without spoiling too much, and even though the film is 43 years old it’s less about giving things away and just needing to see it for yourself, but seriously at one point I’m pretty sure someone turns into a literal pile of bananas! House is a psychedelic drug trip that revels in its weirdness and is the perfect watch for the Halloween season for those who want to stray from comfortable horror affairs and get into a world like no other. It’s also the perfect background halloween film because it’s beautiful to look at and when you come back after a 10 minute talk to a friend you’re guaranteed to come back to something absolutely nuts onscreen putting you right back in! I think Hausu deserves to be seen in the same way as The Rocky Horror Picture show with screenings and parties and fandom during the Halloween season and I’m definitely going to be introducing it to more people. Horror fans, do yourself a service and experience this wild ride for yourselves!