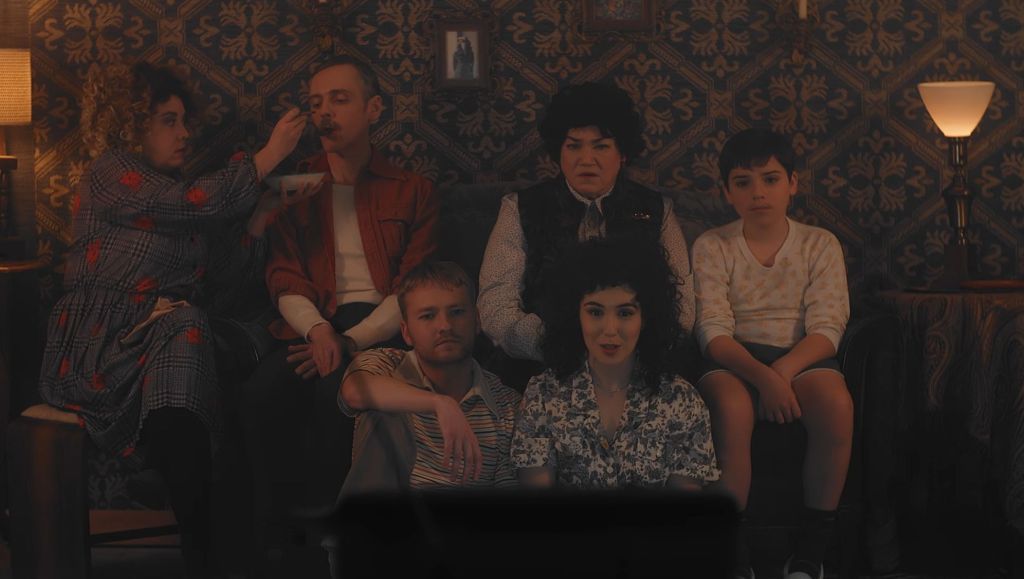 With a title like Potato Dreams of America, you’d be delusional to not go in expecting something unique and strange. I dove completely blind into this and while I got unique and strange, I also got a heartwarming and at times stressful true story that is one that I believe needs to be told.

Potato Dreams of America follows a young gay boy who comes of age in the Soviet Union with his mother Lena, who calls him Potato. Lena is a trained medical graduate who aids prisoners in the corrupt prison nearby, constantly being forced to help cover up murders that take place within the compounds when she can’t save them. Suffering from existentialism, poverty and fear for hers and her son’s life, Lena becomes a mail order bride for an older Christian man in America where her and Potato can live a life devoid of constant fears; or so they thought.

The truth is, I viewed this as an early screener before the SXSW festival began and it took me a few tries to get through the first thirty minutes. The way it’s set up while Potato and Lena are living in the Soviet Union plays out almost like a stage play. It feels over rehearsed, campy and melodramatic. This is not to say I wasn’t enjoying it, because I was; but instead I struggled to see how I could sit through a whole film that would clearly be much better suited on a stage. Luckily, the film takes a much more surreal and modern turn when they move to America, and Potato is now entering his teen years. The tonal shift actually makes you appreciate how the story was told in the first thirty minutes from an artistic lens and makes it a lot more fun in retrospect.

The shift into Potato’s teen years is actually so interesting as we watch him navigate his sexuality, his peers, the new setting, and his deeply and uncomfortably right wing Republican step father who seems to check off every box for the title of a bigot. The thing about this second act and experiencing this mother/son duo in a much calmer setting, is that we’re given new stakes in the story that actually heighten the intensity. Lena has to adapt her lifestyle, her views, her morals, her character even just to please this man who is seemingly in desperate need of the typical “perfect Christian family”. All with the threat of being sent back to her home country where Potato will be forced into the army if they do not meet his personal requirements. The fact that our lead is also queer makes this so terrifying, knowing that Russia is so deeply against the community.

The way this film showcases the struggles of their own immigrant experience isn’t always subtle but it brings up important topics that I’m sure many others will relate to, even if they’re not immigrants themselves. One of the first notable commentaries was when Potato is introduced to his class with a slight language barrier and a name that his teacher struggles to pronounce. She showcases the situation almost amused by it, and then goes on to force him to hang out with the only other Russian kid she knows even though they clearly do not have anything in common. But more importantly, there’s this conversation between Potato and his new friend where she goes on about how she loves his accent and there’s a clear distaste he has with how clearly it’s being fetishized in a way by his peers. He goes on to talk about how he’s going to try his best to get rid of it over time because as an immigrant from a dark place, all he wants to do is live his American dream and life but that can be hard to do when every time he speaks he’s reminded by others where he comes from and has to relive what he’s gone through. There was just so much commentary revealed through simple conversations, some of those conversations will be sure to make others think about the way they talk and acknowledge others’ background when it comes to these situations.

Through all the dark subject matter, this is a comedy at heart. The way it handles comedy is extremely smart because it also knows when to step back and allow the drama of a moment to play out as sad as it is or seems. I also have to commend the way this film handled coming out and if I’m being honest, this was easily in my top five favourite coming out of the closet moments in film. The way it went on to shed light on how important queer friends, family and safe places were as well was exceptional. This led into one of my favourite commentaries which was the sexual fetishization of other backgrounds and ethnicities in our community. While it happens within any sexuality, I’ve had friends disclose their stories of white queer men either wanting them to use their first language or accent during sex as a way of highlighting that aspect of them in a sexual manor. Some even have experiences of ignorant people making it known that they’ve never slept with someone of their race. There’s a whole sequence of one night stands where Potato consistently deals with ignorant comments during sex and the way he’s become desensitized almost and brushes it off.

It’s rare that we come across such unique storytelling nowadays. This is the difference that is needed in the industry but isn’t always accepted by mainstream audiences; but that’s okay. There’s a lot of different audiences out there for a film that takes risks like this one and it’s a strong addition to autobiographical stories being told through film and television. Wes Hurley’s direction is clear and concise, he knew what he wanted to create and his vision came out beautifully in my eyes. This is a director to look out for and a story to check out. The cast of relatively unknown actors do great work all around, including a fun cameo of Jonathan Bennett (Mean Girls) as Jesus. I can honestly say that I can not wait to own this on DVD one day and rewatch this many, many times.