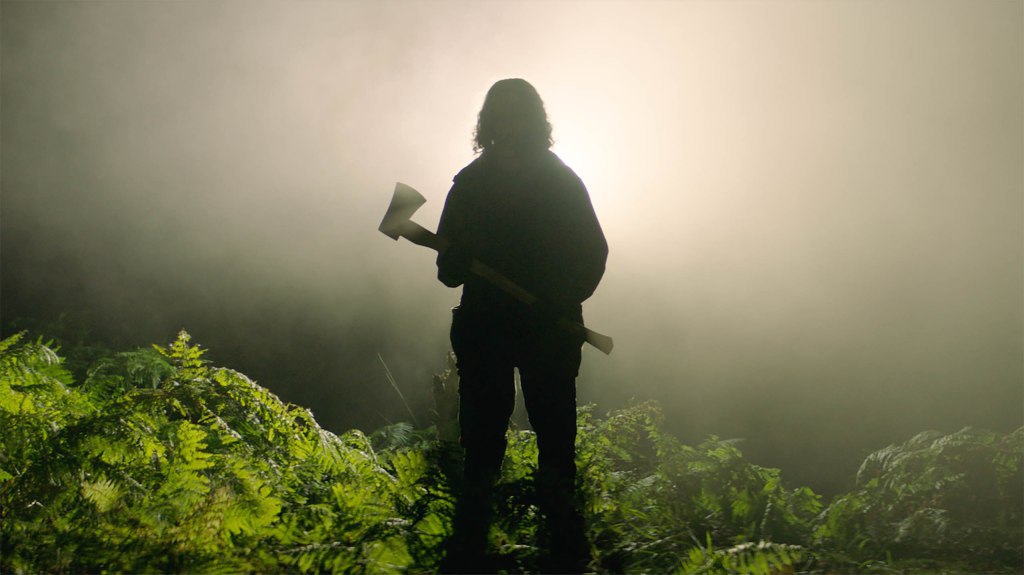 There has always been a cathartic feeling when a movie comes out that perfectly reflects and represents the current time period that we are living in. With Ben Wheatley’s In The Earth, we get this perfect world that mirrors our own, but also enhances it by combining folklore elements to it. I personally adore folklore horror movies because it  can really dig deep into some deranged form of storytelling that is very unique and haunting for the viewer. There is no refutation that this movie doesn’t have a very unique presence amongst the genre of folklore horror. The movie keeps its own identity by providing a new perspective by blending different genres that are connected to today’s time. Pandemic movies seem to be on the rise and In The Earth is able to touch on this genre, but not rely on it for it’s story telling. Events may revolve around the topic of a deadly virus, but it keeps the story engaged on the characters which makes everything else secondary.

Taking place in a world where there is a devastating virus and in desperate need for a cure. A couple of scientists must venture into a forest to do a routine equipment run and find themselves discovering something nefarious during their journey. The two scientists are played by Joel Fry (Martin Lowery) and Ellora Torchia (Alma). Their journey into the forest brings the viewer on a non stop thrill ride that brings psychological horror on an unprecedented level. The cinematography in this movie showcases some of the best shots in a horror movie that I have seen in a while. A crazy ride from start to finish. The movie is brimming with psychedelic effects that will blow your mind and brings symbolic meaning that is essential to the story telling. Dives deep into the psychology of people and their behaviors which also adds layers to its storytelling. I really enjoyed this movie.

I think it is important to bring up the fact that this movie was made during the pandemic that we are currently facing. It seems that this was a secret project that was quickly announced in September of 2020. Ben Wheatley said that he had written and directed this movie in only 15 days in August. We see the characters in this movie not only wear masks, but they too also take the proper precautions necessary to stay safe. Having the world in this movie be in a pandemic not only makes sense, but it also allows us as viewers to reflect on the world we live in. We see the characters wearing masks, using hand sanitizer, staying distant and we know why they had to do that. We can relate to the characters almost immediately. This only served as a strength for the movie to give me common ground with these individuals. The fact that Ben and the rest of the cast and crew were able to make this movie, is an absolute achievement. We know that making a movie takes a village of people and they were able to accomplish this task in a very responsible way. Mixing this storyline with folklore, we got a very interesting plot. Something that could entertain many fans of the new genre of pandemic movies.

In The Earth is a special movie because it was directed during the pandemic in a short amount of time. It blends the real life experiences that we are dealing with and with the folklore horror genre. The story contains very key elements. Above everything, it is a social commentary on humanity and how people deal with drastic situations. There are many lines that support this argument that really sticks with you. I do have to give major props to the actors in this movie for they are able to flawlessly deliver these lines. There is a moment where the subject of how people do not change no matter what the circumstance. That people will inevitably go back to who they are after world changing events. That when everything goes back to “normal”, it will be like nothing had ever happened. That people often just forget about the events and just move on and go back to their ordinary lives. I thought that this theme was very interesting and I’m glad that it was brought up. With this extra layer of ideology, I think people will have great discussions after watching this. They also bring the great debate of science versus belief. This is where folklore comes into play. With scientists involved, we are able to see the movie with a grounded perspective, but when introduced to rituals and folklore, it brings a new fresh take to the movie where you have to disband belief. You can even see where these two different beliefs overlap as well. This movie could have easily been a psychological thriller with a race against the clock to find a cure, but Ben decided to incorporate a folklore story stitched into it for good reason. This brings out a very compelling and interesting story that had me glued to my seat and wanting more after its runtime.

Visuals can either make it or break for me in a movie. I think Ben Wheatley was very intelligent on how he used his visual effects. With such a limited time in making this movie, a lot of the visuals seemed a little off putting in some parts of the movie. There are numerous quick montage sequences observing fast moving images of nature and other drug induced imagery. While watching this on the screen, I began to think to myself that I have seen this before and it’s nothing new. Although that may be the case, I think it was still a very clever and cool way to represent the symbolism they were going for. The best scenes were at night. There were some amazing and beautiful scenes that used strobe lights and a flare, which created a lot of tension. Immense use of lighting techniques that always hit the mark. The imagery was not only beautiful to stare at, but it helped make the scenes that more intense and create the necessary tension. Throughout the runtime we see different camera movements as well. There is a great use where the camera feels somewhat far away looking at our characters like it is stalking them. This helps drive the idea that the characters are in constant danger and anything can happen at any time. The body horror is also top tier. There is some brutal imagery of bloody injuries and violent acts. Some of the acting fell a little short in these scenes, but overall it delivered horror the best way it could. This movie is absolutely not for the faint of heart.

In The Earth overall was an extremely fun watch. I can easily say that this movie is unique and blends two genres effortlessly. The movie doesn’t seem like it was made during a global pandemic and knowing it only took them 15 days still blows my mind. It’s insane to think that this movie was made in August. The strongest element of this movie is the cinematography and its unique storytelling. There are many deep layers to the social commentary within it and also shares a different outlook to life. I think a lot of people will enjoy this movie. The cast and crew did an amazing job, especially being shot during the pandemic. It is also one of those pandemic movies that doesn’t have a sour taste as well. There seems to be an influx of quarantine and pandemic movies out right now. Some miss the mark and feel disingenuous of what they are trying to convey. In The Earth is very respectful on the subject manner it is tackling. Definitely check this one out if it is safe doing so.