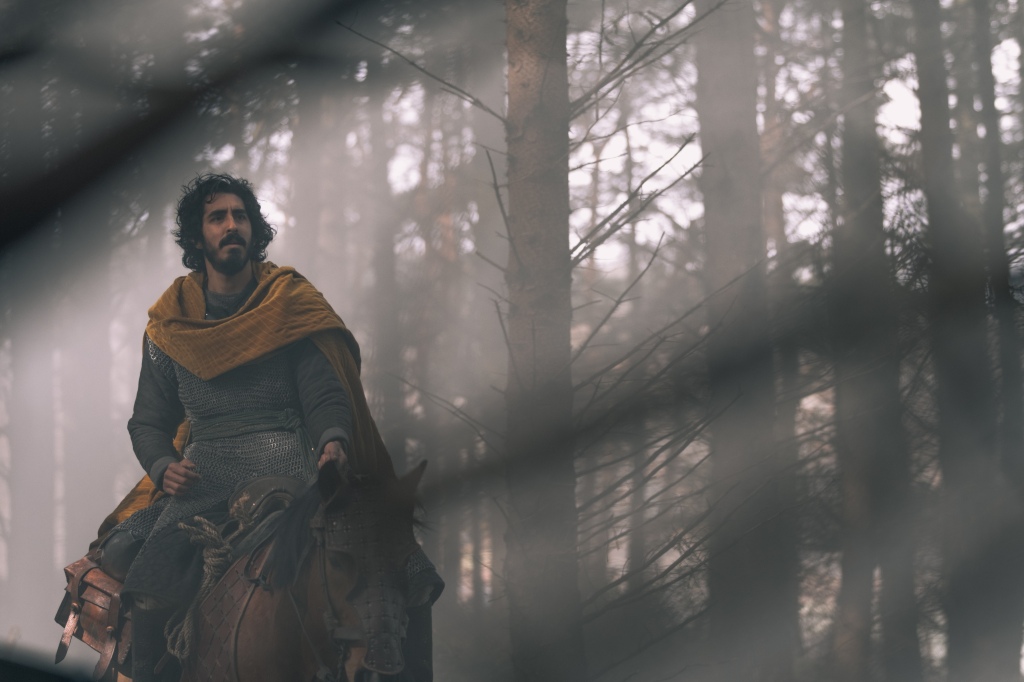 It seems as if most of film twitter has been looking forward to David Lowery’s for the past year, and with good reason. I vividly remember both my theatre experiences for A Ghost Story and Pete’s Dragon, two films that left me a weeping mess, unaware of how I would be able to get out of my seat and go about my day. After seeing The Green Knight, I can now add another film experience that had me floating on my walk out of the theatre. Between the trailers, Lowery’s name, and Dev Patel’s presence, I had hitheregh expectations and an idea of what the film would be. The Green Knight blew those expectations away and gave me a movie that I wasn’t prepared for, but one that I want to live inside again and again, even if it’s a film that is hard to review. I had the opportunity to see the film a few days before the release, and while I walked out knowing I loved the movie, I couldn’t figure out how to put it into words, so I struggled to piece this together.

The Green Knight is based on a poem from the 14th century named Sir Gawain and the Green Knight. As a great precursor video for the film states, there is only one original copy of the poem that has been found and “this is who wrote it, we have no idea.” The poem tells a story that includes fame, glory, and to prove Sir Gawain’s worth as a knight alongside legends. The film shows us Gawain, one of the knights of the round table, as he plays a game with the titular Green Knight. The game, being that the Green Knight and another knight must fight. If the other knight can strike the Green Knight, then that knight has a year to find the Green Knight and get the same blow in return. At this point in Gawain’s life, he has no story to tell. He’s on a search for one, so he doesn’t aim for a scratch but a beheading when given the opportunity.

There’s something magical about the film that is hard to pinpoint. For one, The Green Knight does something that I always love when a film gives in entirely to itself. There isn’t debating what type of film it might be per se, but rather what makes sense for the film. It allows itself to take its time, be unique and have multiple layers that I’m still trying to grasp and understand. A repeat viewing (or two) is very crucial. While I haven’t seen it a second time, it feels as if I’ve had due to explaining my thoughts to friends and co-workers who have either seen the film or have a lot of interest in it.

The film never attempts to be a film for the general audience. It’s entirely itself for itself. While David Lowery has mentioned that he questioned his cut of the film, and I’m not aware of how much had changed from his version last year to the one released in theatres, The Green Knight is a confident film in ways that most aren’t. There’s no shying away from this period piece with romantic and beautiful dialogue that sings when spoken by the talented cast. There isn’t a single frame of the film that isn’t stunning, a moment that isn’t underscored by Daniel Hart’s gorgeous score. While I understand some might not be interested in the film due to the marketing (frankly, both undersells the film and advertises a different experience). There will be those who watch the film who might hate it, but I am not surprised to see how many film fans are falling head over heels for this film. And not just because of Dev Patel.

Avoid the following paragraph if you have not seen the film, but since I’ve seen the film, there are three lines spoken by Patel that I haven’t been able to stop thinking about. The pairing of both “I’m not ready” at the beginning and the “I’m ready” at the end of the film, but none strike harder and hold so much weight as “Is this really all there is?”” A man who believes his birthright and purpose is to be a knight – a legend like those who fought alongside his uncle, King Arthur.

Gawain realizes that being a knight is a thankless job. He doesn’t get the wealth he had dreamt of, or the women he dreamt of, or even the honour he’s been waiting for. He gets to die, like everyone else, without a true story to tell. It’s a powerful moment of questioning our worth and value in life. Alongside the ending that makes me think of Scorsese’s The Last Temptation of Christ, it puts everything into perspective. Which makes the final blow (heh, sorry) of his “I’m ready” line more impactful. You again feel the weight of a lifetime, many lifetimes of those who had died while trying to be chivalrous or kind. Not just during medieval times, but in the present, for those who always attempt to do the right thing, even when nobody’s looking.

Lowery’s film is very different from the text, he adds and takes away things as he pleases. While I haven’t read the poem and am not too familiar with the story outside of the synopsis I’ve read, the point seems to remain almost similar. Lowery asks us what does it mean to be a knight, chivalrous and ready to run into battle for the right thing while also valuing our life, our realization of losing our life. It’s not easy, and while Gawain is given side-quests on his way to the green chapel, we too are given small tests every day. We reevaluate as we go through life and constantly try to do better because the alternative is unattractive. When Gawain asks, “Is this really all there is?” we have to make it worth it.