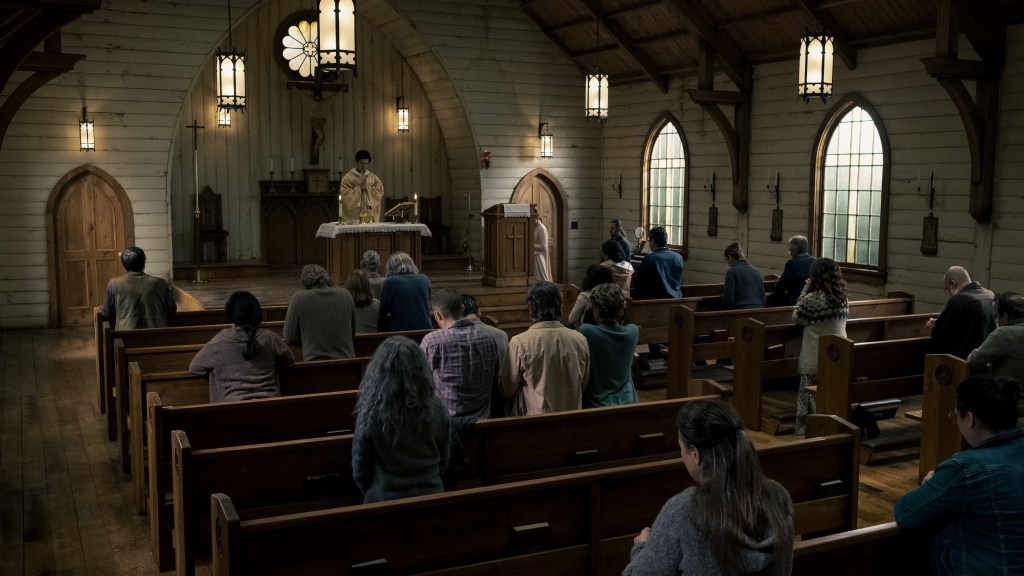 My first recollections of mass were back when I lived in the chilly mountains of Caracas, Venezuela. I remember getting up earlier than usual on a Sunday. Bleary-eyed and a little disgruntled at being woken up so early just to go to some stained glass room and be forced to parrot back meaningless words. Words not four-year-olds in their small, underdeveloped mind could ever really understand at that age. I remember my older brother making faces at me from across the pew we all sat with our family, hoping to get me to giggle in the middle of the priest’s sermon. I usually caved, much to the embarrassment of my mom. I do remember, however, that even at such a young age, how much the experience of it all granted me some small semblance of peace—just sitting in a pew for one hour, in the company of other people, all of us sitting in silence half the time.

Eventually, I grew up and renounced all forms of organized religion. Not because I don’t believe. Perhaps I don’t “believe” in the traditional man in the clouds ideology. Nor am I agnostic. I’d say I’m a spiritual—believer of the energy that surrounds us all and the universe. Maybe I am a little idealistic regarding the order of the universe and the belief in fate and destiny and patterns out of control that connect us all somehow. Or maybe I refuse to let cynicism consume me from the inside out.

Mike Flanagan’s Midnight Mass was as if Flanagan had reached into the very depths of my soul and projected my innermost fears and dreams on screen. A mosaic of my complicated feelings about growing up Catholic and keeping faith in anything that kept me tethered to this world. The way guilt seeps into every corner of your life until every action you take fills you with dread because it’s not serving a higher purpose outside of the “self.” Midnight Mass is the reconciliation with spiritually I’ve been waiting for. Damon Lindelof’s The Leftovers came close to it but lacked the intricacy of growing up Catholic interwoven throughout its narrative.

Riley Flynn, played by Zach Gilford, felt like someone I could reach across the screen and touch. So honest and raw to me. After killing someone during a drunk driving accident, Riley finds his way back home to the small island of Crockett after serving his time in prison for four years. Where do we go when the world swallows us whole and spits us back out again? Home, that’s where. On an island where everyone knows each other, Riley’s “sins” hang above him like the darkest of clouds. Brighter than the red “A” of the Scarlett Letter. Riley knows there’s no coming back from what he did. He can’t undo the death of the girl he killed in the accident. But that’s not what Midnight Mass focuses on. Instead, it focuses on Riley’s complexities within the context of his religious upbringing and finding self-actualization and absolution outside of it.

It feels like all we do in life is live for absolution from our “sins.” The constant gives and takes for an ounce of self-fulfillment and peace in a world that seems relentless in doing the opposite. Our very existence becomes a burden or something we must defend. That’s what my Catholic upbringing taught me, what Riley learned from his. The belief that existing is the never-ending repenting of sin. Even more, so is the one-act he can’t take back, doubling down on that belief. Yet, Midnight Mass grants Riley and its viewers the absolution we so desperately seek. Absolution is found in the form of love.

Riley sacrifices himself for his high school sweetheart Erin Greene and the child she’s carrying in a final act of love. Expecting nothing in return, Riley quite literally burns for Erin’s survival and the many other lives on the island. Citing Genesis 3:19 in both its literal and metaphorical iteration, “by the sweat of your face you shall eat bread, till you return to the ground, for out of it you were taken; for you are dust, and to dust you shall return” becomes the absolution of humanity. Of Riley’s humanity and that of the rest of the forgotten island. The absolute becomes so universal in that moment because it transcends the physical body and realm and moves into this spiritual chasm where only love and peace reside. This is why we see Riley on the same boat Erin saw him burn in; only across from him is the girl he killed in the accident. The face of the girl who’s haunted him in nightmares and hallucinations is now smiling at him. At peace.

Midnight Mass taught me to love. The only way to exist with a modicum of peace is through acts of love. It’s not what I learned in Catechism class on Saturdays, where all I did was read an old text at nauseam. Mere words. Words with no meaning. There was no depth and/or emotion to a time that spoke to a whole new generation and historical context. With its words and imagery, Midnight Mass gave me more with the opening as “And the Grass Won’t Pay No Mind” by Neil Diamond played than all the years I did Catechism. And yet, it also reconciled with me the pieces of myself that did feel connected to my religious upbringing. Through the love of community. Of sanctity in a room full of strangers praying for a better day. For love, peace, and kindness.

Thinking back now, every monologue on Midnight Mass was very reminiscent of sermons. Except, these would be the sermons you’d have in the quiet of prayer, kneeling in an alter. Just you and the wide expanse of the universe. So cosmic and vast that your whole body would feel weightless. It was how I felt whenever I walked into an empty church. I still do. Like the ones between Riley and Erin, those monologues reminded me of the good parts. Of the pieces, I still carry with me. Faith, community, love. Of the idea that our existence is much bigger than ourselves and this physical world. Just like Father Paul’s (Hamish Linklater) own journey for keeping alive, or rejuvenating, that which he held most dear, I too believe in the perpetuity of love. That extends farther than we could ever see.

Midnight Mass gave life to my still ongoing muddled relationship with religion, and I’m forever grateful for that. It’s so difficult because, as a structure of power, it’s something I denounce beyond doubt. However, the sense of belonging and catharsis it granted me lingers. Sitting in a church has and probably will always feel like home. I’ve reconciled with that. Church not so much in its physical standing building but in its symbolic representation, which gives me the space to breathe. It’s a connection that’s hard to explain. A feeling deep within myself that much like love can’t ever be measured or conjured into this physical realm. Should every structure crumble to the ground, I know I can feel that sense of home that any church grants me by closing my eyes and praying. The invisible line that ties me to the energy I feel in the world much like the one the residents of Crockett felt in those final moments, where their faces only reflected peace, knowing their love for one another was limitless.