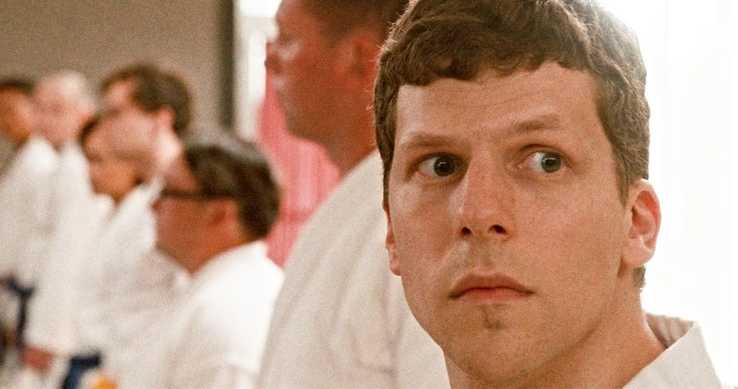 We go into minor spoilers (plot details) but if you do not want to be spoiled, watch The Art of Self Defense first. Without further ado, enjoy our interview with Jesse Eisenberg!

Andres: First I just need to say, I’ve been a huge fan for a very long time, so this is incredible.

Jesse: Thank you so much. Where are you from?

Andres: Oh, right. Are you there for Fantasia because I know your next film [Vivarium] is playing soon?

Jesse: No, we’re just visiting. We like it here. Have you been here before?

Andres: I’ve been there once, last fall actually.  It’s really beautiful. So I’ve been hearing about this film since it’s premiered at SXSW, and I really enjoyed it when I got to see it. But for our audience, what’s it about, and can you briefly describe it?

Jesse: Sure,  the movie is – the story is about this kind of timid guy who I play, Casey, who gets attacked one night on the street. So he decides to join a karate class to try to learn how to defend himself. And then the karate class becomes this very strange almost cult-like experience for him. But overall, the movie is a – in my opinion – brilliantly funny commentary on like masculinity and the absurdity of the way some men think about themselves. And to think about what it means to be a man, the way we treat women. So the movie is a really brilliant satire and especially now that the film is coming out now at a time when the people are talking about toxic masculinity and men’s place in society. I think it’s really entertaining but also an important part of that conversation.

Andres: That’s something that I noticed early on and I sort of laughed at how they were tackling it because it was done differently than how I’d seen in other films prior. It was a way to show how absurd it could be.

Jesse: Exactly, it’s not like the film is not really naturalistic, it’s like a stylized movie and it uses that style and the strange characterization as a kind of commentary on how absurd men can be. It’s not really naturalistic, it’s pretty blunt. Like the male antagonist who’s the leader of the karate class, he speaks in a way that is ridiculous, but because he believes it so much, it seems like it has some value. But of course not, it’s ridiculous.

Andres: Was the film using toxic masculinity – was that part of the pitch to you, or was it the story first?

Jesse: No, on the contrary. So, the movie was written in 2015 and it’s written by a guy [Riley Stearns] whose previous movie is about cults, so when I read it, I thought “okay, this is kind of an allegory to cult behaviour. This is the story of the psychology of you know, a cult leader, and a cult follower. And the way that people can manipulate others.” And then while we were filming the movie, the stories came out about Harvey Weinstein and the #MeToo movement began and I realized that the movie is actually this wonderful prescient commentary on the way how men think of themselves. Or can think of themselves. So it wasn’t presented that way, because I don’t think it was intended that way. I think it only becomes that sort of commentary on toxic masculinity because the culture at large is thinking about that and this movie has a lot to say about it, but it wasn’t initially intended for it.

Andres: For me, I remember watching Fight Club recently and only then realizing that that’s what the film is about. But I’ve always laughed at the idea that pop culture (I should have said “Film Bros”) tends to idolize Tyler Durden as this hero, and it’s very clear that this film wanted to do the opposite.

Jesse: That’s very interesting. Everywhere this movie has played, people are like hysterically laughing during it. It tells me that people are viewing it as absurd? But I do imagine that some people might look at the Sensei character, as like – I don’t know, I think it would be pretty hard to view him in any other way than absurd, but I guess it’s possible to view him and agree with his position. Even though, to anybody I know, they think he’s ridiculous.

Andres: Have you done martial arts before?

Jesse: I did some training for this movie for a few weeks with one of the best martial artists in the world – her name is Mindy Kelly. She designed all the fights for the movie and she is a very strict teacher, and very talented herself. I had this crash course in it. Some of the other actors – like Steve Terada and he plays a blue belt in the movie, he’s a Japanese American actor. And he’s also one of the best in the world. We were surrounded by actual martial artists which include the director, who’s a great jujitsu artist.

Andres: Earlier you brought up the stylized dialogue, I’m a huge fan of it, I remember rewinding parts cause I was laughing so hard from it. What was your reaction to reading it for the first time, because I can only imagine it’s like a gold mine?

Jesse: I was in tears, I could not believe how funny it was. I mean, my character made leather belts for everybody in class that corresponds with their karate belt, basically the colour that they wear, and I give my Sensei a black belt. Because he’s a black belt. And it’s just a black leather belt, but he talks about this belt like it’s imbued with this confidence, but it also happens to hold up his pants. As you just said, in my case, I re-read it, in your case, you rewatched it, but like I couldn’t believe what I was reading because it was so funny, but at the same time, it was so sincere. It’s not the type of comedy where the characters are winking at the audience, and the audience is in on the joke, the characters are incredibly sincere and the stuff they’re talking about is so ridiculous.

Andres: I guess since you shot this way back, you then shot Vivarium afterward. How is it working with Imogen Poots again?

Jesse: Oh Imogen’s great! You know, a few reasons. one is she’s a great actress. But she also really good taste in movies. You know she is someone who occasionally experiments with the bigger budgeted movies. But I think her taste lies in kind of sophisticated art films. So when she called me to do Vivarium, cause she was involved in that movie before I was. I knew it would be a really interesting experience. And then she’s just a great actress to work with. Everything you would want. She has a great sense of humour, she’s also serious, and she’s not indulgent, she’s generous.  And you know, she’s just the best. And we actually did a movie, goodness, about ten years ago now called Solitary Man. We didn’t have much to do together in it, but that’s when I initially got to know her.

Andres: What was the atmosphere on set like for an absurd, semi-serious in a strange way film?

Jesse: It was funnier than doing a regular comedy because we had to be so sincere, we don’t have the catharsis of like – like I just finished Zombieland [I should have asked another question about this, sorry friends] and in that movie, the characters are kind of laughing at each other. And so you have the catharsis of being a self-aware person who can laugh. But in this movie, the characters are so sincere that you don’t have that catharsis which makes it so much funnier because you’re trying to bottle it up. So like, in a certain scene, I punch my boss in the throat and I tell him I’m going to stay home and fantasize about his wife in a bikini instead of going to his barbeque and I did the scene like twenty times because I couldn’t get it done without laughing. And I knew it had performed in one take, with no cuts, because it’s like a monologue. And you’re simultaneously enjoying it and also hating yourself like “why can’t I get through this scene?” without having a laughing attack. But yeah, it was difficult, like Alessandro too, his dialogue is so funny, and they’re certain things like if we made eye contact we would immediately start laughing. I think doing a movie like this is so much harder than a regular comedy because you have to be so sincere.

Andres: As you were reading the script, for me as I watched the film, once you get to see what’s in the equipment room, I was a bit thrown back and wasn’t expecting it at all. Was it as big as a shock to you as a reader to the viewers?

Jesse: Yeah, I thought it was absolutely brilliant because I thought if the movie didn’t have any of these wonderful plot twists, it would still be great. Because it’s so funny, and because it’s got this kind of sly commentary on all this stuff. But the fact that it also his this brilliant plot where every scene is necessary and every moment relates to a larger part of the plot told me that it’s a really special movie. I think it’s a perfect script. I hope they publish it. It’s a perfect script in the sense that there’s nothing extraneous in it, every moment is pushing the plot forward in some way, but is also character full and entertaining. They only cut out like a four-second scene in the movie, but otherwise, they couldn’t cut out anything it was related to the plot.

[Jesse briefly gets interrupted on the other line]

Andres: That’s okay, I was about to wrap up anyway.

Andres: I haven’t before, but I applied for press and was hoping to hear back.

Jesse:  You do Toronto?

Jesse: Cool, cool. Thank you so much for doing this, I really appreciate speaking with you.

Andres: Wow, yeah no thank you for taking the time out as well.

Jesse: Take care and have a good day.

Please go out and see The Art of Self Defense, out in theatres July 19th!