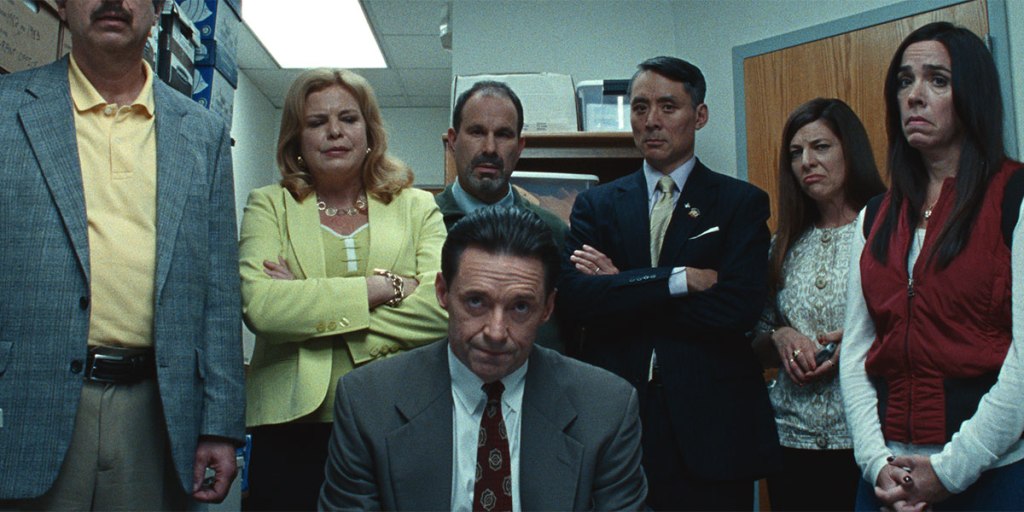 Bad Education is wild. I don’t know how to really describe it because it’s such a bonker concept and yet, it’s real. Something that actually happened where taxpayers’ money was used for years and years by the school administrators. The only reason why this story broke? A high school student poked around and discovered the truth. Written by Mike Makowsky, who actually went to the Roslyn High School when it happened and directed by Cory Finley (Thoroughbreds), Bad Education blends drama and comedy perfectly in a film that once it gets going it’s unstoppable.

Hugh Jackman is an actor we know and love, an actor that we know is great because we have seen it over and over again. So when you see a performance where you don’t even think about the fact that this is Hugh Jackman. Bad Education is probably Jackman’s best performance since The Prestige, a performance where he totally loses himself in a character and you don’t see the actor but just the character. What is extraordinary is that his amazing performance isn’t even the best one in the film. No, Allison Janney (I, Tonya) steals every single scene she is in. Janney is an actress who has proven herself over and over again and I don’t know why I am surprised every time I watch something with her in it that she is so extraordinary. With Bad Education, Janney and Jackman are able to completely shed away the fact that they are known actors that we love and become their characters completely.

The main problem with Bad Education is the pace. The film takes so long to establish it’s character and premise that it feels like forever before the film itself starts. And I know that establishing everything was important, but the thing is that the film drags on a little bit too long because of this. But because of the fact that the film and script are so smart that it’s easy to forgive its length. There’s something special about the script, the way Makowsky was able to blend drama and comedy is not only good but it also makes it special. It makes the film better for it, the way the dialogue flows and the way it’s able to blend the seriousness of the situation that happened with jokes that make the film less heavy to watch is great.

What makes Bad Education special is that it plays on your expectations. The story is so out there that you don’t realize that this is all true. The fact that the scandal was discovered by a student, that they tried to hide, succeeded for a while even and that’s just scratching the surface. Bad Education doesn’t change the game in terms of filmmaking, it follows the pattern pretty closely but sometimes following the path that was created before works. Cory Finley is solid behind the camera, he knows what he is doing and it shows. The film never goes too far left, staying on tracks and sticking the landing perfectly.

Bad Education is fun and never tries to take itself too seriously. That means that the film knows exactly what it is, once it gets to what it wants to say, it does it perfectly. With perfect performances and a funny script, the film is fun from top to bottom.