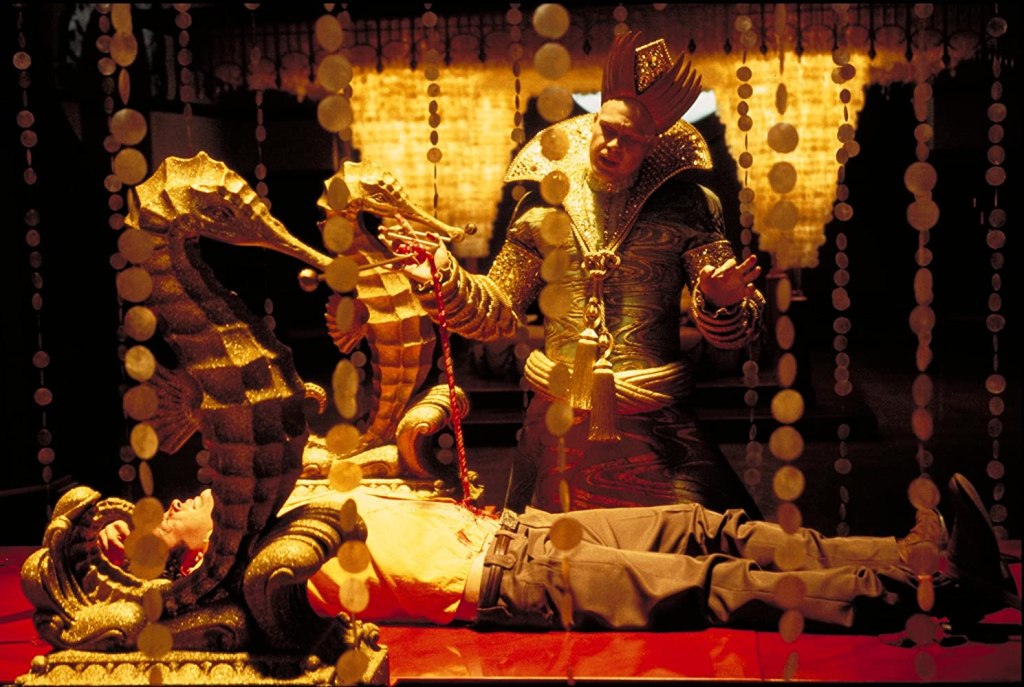 For a long time, I avoided watching this film. The imagery associated with the film absolutely terrified me. And it had reason to do so, it’s a deeply unsettling film, but it’s also one of the most gorgeous looking unsettling films I’ve seen in a while.

Tarsem Singh is a filmmaker I absolutely adore and admire for his beautiful, beautiful style and images he’s able to construct with his directors of photography. After The Cell, he would go onto make The Fall, which is one of the best-looking films of all time.

Tarsem made his mark at first as a music video director. Some of the big ones were “Hold On” by En Vogue, and also “Losing My Religion” by R.E.M. Looking at these music videos, it was clear that Tarsem was fascinated by art and paintings. When he went on to make this film, and his next ones, it would be clear this is a massive influence on everything he would ever make. And some people would see that as a problem to the film, sometimes we don’t want style over substance, but I love and adore his style so sign me the fuck up.

In “horror-adjacent” films like Silence of the Lambs, or Se7en (and yes, I’m going to continuously refer to it with the number in the title), we are constantly questioning the mind of the serial killer. Films like Se7en eventually led to the likes of CSI, or Criminal Minds phenom that lives on television. Rewatching The Cell, I realize this might have been part of the equation as well. In Se7en, David Fincher and Andrew Kevin Walker ask the question, “what if we can understand and figure out a murderer?” In Silence of the Lambs, Jonathan Demme and Ted Tally posit that maybe we need the help of another monster to understand one truly. But in The Cell, Tarsem Singh and Mark Protosevich say let’s skip the middle man, and enter their mind ourselves.

What follows is a magical, terrifying, and visual masterpiece. Starring Jennifer Lopez as Dr. Catherine Deane, a social worker who finds herself working on an experimental virtual reality treatment for coma patients. It allows someone to enter the mind of the other patient. The program is being funded by the parents of a patient, Edward Baines. Meanwhile, Peter Novak (Vince Vaughn) is trying to catch a serial killer who bleaches his female victims and is made to look like dolls. When Peter and the police finally reach the killer Carl Stargher (Vincent D’Onofrio), he has fallen into a coma himself. Edward’s father is ready to pull his funding before Catherine begins to go after Carl. A match made in hell.

Even though The Fall is a lot friendlier and less alarming, there’s a lot that stays in common. One reason is the love for the fantasy world. An almost dream-like scenescape that exists out of reality, but just within the world’s grasp. It’s these reasons why I find myself attracted to the two films that would make a very unique double-feature. One is about entering a killer’s mind, while the other is about the beauty and imagination of a child’s mind.

Which, to be fair is brought up in The Cell as well. Jake Thomas (Lizzie McGuire) plays a younger Carl. And through him, we see the atrocities and abuse that he suffered from as a child. These things are also part of the argument that maybe Carl wasn’t always meant to end up this way. But maybe that’s just “chicken or the egg.” We’ll never truly know if it’s what caused him to be a murderer. But it’s safe to say it was a factor.

By having Carl abduct a woman early in the film before falling in a coma, but not before killing her, the film puts a timer on itself. As well as very huge stakes. But since most of the film mainly exists in one person’s brain or another, and since it almost works like a dream (or even as I’m typing this, reminds me of Inception a little), time is played with loosely. And that never feels like being tricked, it feels earned.

I always thought the film might have been a bomb, but in reality, it was a financial success. On a budget of 33 million, it made 104 at the box office. But critically, it was a mess. On one hand, Roger Ebert gave the film four out of four stars and named it one of the best films of the year, but on the other, David Edelstein of Slate panned it and wrote that he didn’t want to see forgiveness for Carl.

I don’t think the film is about looking for answers or seeking empathy as Edelstein stated in his review. I think the film is more interested in what lies in our own minds, and how our minds are filled with art. Whether you find that art beautiful or disturbing is another discussion entirely.