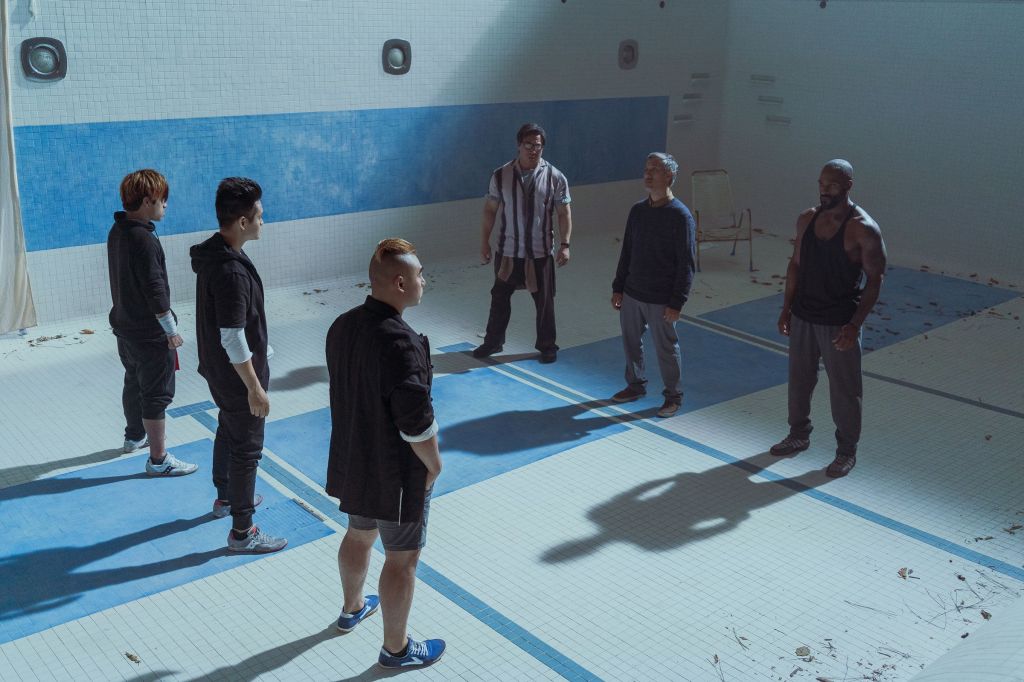 This happens with every festival really, you watch too many, you lose sleep, and then you almost lose excitement as the films bleed into one another. But, hopefully, if you’re lucky, you’ll find a movie that will energize and be reminded why you were once excited for this festival in the first place. And friends, that movie is Bao Tran’s The Paper Tigers.

Before diving in and learning about Bao Tran, one thing I knew for certain coming from watching this film, he loves martial arts and it truly inspired him to be the man that he is today. That, and he knows how to pick an incredible poster for the film.

The film opens by meeting Master Cheung (Roger Yuan) being hit in an alley, as he falls to the ground and slowly dies by himself. After, we get to see thirty years prior and are introduced to his disciples by using great VHS based videography to show the evolution and the relationships between our three leads, the three tigers. We get to see an early bond found in Danny (played by Alain Uy, Yoshi Sudarso and Kieran Tamondong), Hing (Ron Yuan, Peter Sadarso, and Bryan Kinder), and Jim (Mykel Shannon Jenkins, Gui Da Silva-Greene, and Malakai James). This is why when the film jumps back to present day, it hurts all the more to see none of them are truly in touch anymore.

Before we get into the real martial arts of the film, at its core, we are given three men who were at once, inseparable, but now, wouldn’t attend their Master’s funeral if the other also attended. And that has to be something that everybody can relate to. Just recently, I spoke to a close friend of mine – realized it’s almost been 10 years since we’ve graduated from High School. We got to thinking about all the friends and people we thought would always be in our lives, until one day, they weren’t. So, to add the drama between Jim and Danny is an excellent touch as these men try to honour their old master, while at the same time, still have a form of bad blood between one another.

When I was young, I very briefly took Tae Kwan Do, and this was partially because of my father, and his love of martial arts (and the films that involve them), and him wanting me and my older brother to be able to defend ourselves. I grew up watching the martial arts films he loved, and I didn’t always appreciate them all, I couldn’t be invested. But, I was invested and hooked with The Paper Tigers throughout the entire run time. I didn’t want the film to end. This film had me laugh louder than I had in a while. And it is filled to the brim with heart and emotion. Whether that’s between one another, or Danny as he tries to be a better father for his son.

It seems like more and more there are directors who are able to hit it out of the park on their debut feature, and Bao Tran seems to be another one. The way he’s able to balance the incredible action into a huge laugh, before adding actual catharsis and emotion into certain punches – it’s an absolute joy to be able to witness this in action. And that has to be because of the excellent work that his three tigers are able to do in their film.

It’s a shame the film runs so close to the finish line of the festival, because it deserves to be the incredible palette cleanser at the midway point. Let’s hope the film is released wide soon enough, so that others can love this film like I have.