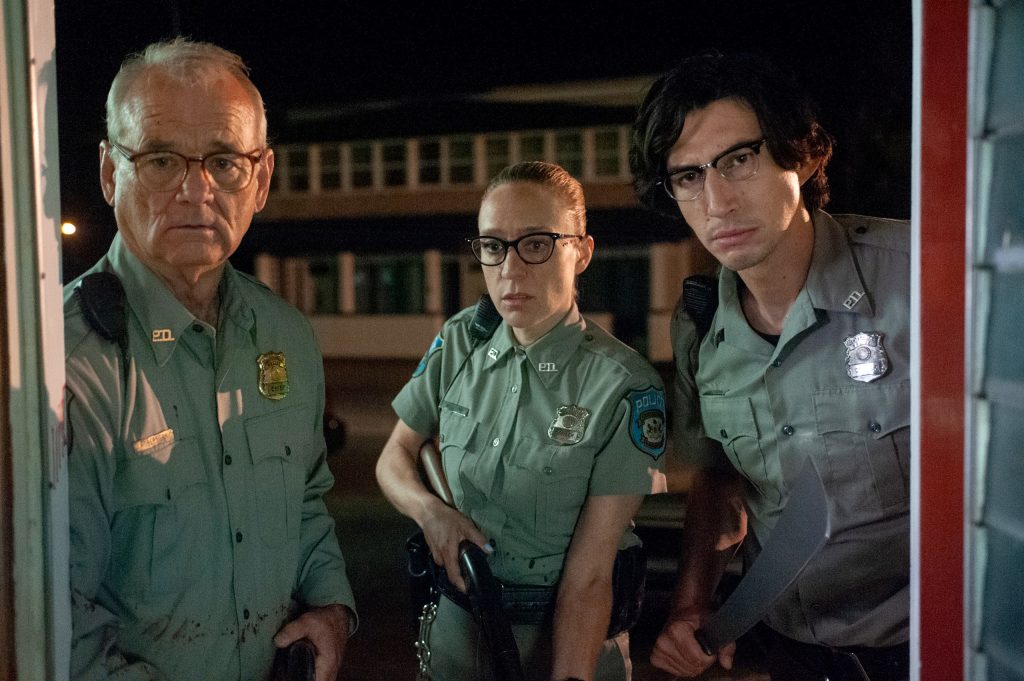 In The Dead Don’t Die, there is an imminent danger that repeats itself throughout the movie. “This is going to end badly”, says Officer Ronnie Peterson (Adam Driver) to his colleagues. The dark and mysterious allure of Jim Jarmusch’s satirical zombie horror film reveals a world that deals with an environmental crisis that is not explained properly, but it does not matter because the dead are rising. A master of idiosyncratic, dry humour comedies, Jarmusch stays within the comedy genre and with The Dead Don’t Die, he challenges himself to bring the same deadpan humour with characters that are hilarious in their way.

Set in a small town where nothing happens, Centreville, Police Chief Cliff Robertson (Bill Murray) and Officer Peterson patrol the streets, as they are contemplating on whether to buy coffee and doughnuts before heading home. Strange things start happening when Cliff notices there’s still daylight after 8 pm, when Ronnie’s cell phone and watch stop working, pets behave strangely, and when the dead start rising from the grave. These unusual phenomena happened because greedy energy companies had spun the Earth’s axis with polar fracking. The reason for the zombie apocalypse is not explained thoroughly, but the death of two diner employees at the hands of two coffee-obsessed zombies shakes the townspeople. When Ronnie suggests that this may be the work of zombies, Cliff is in disbelief. Later that evening, Ronnie teaches Cliff how to kill zombies, and buys supplies to protect themselves at the station. Other townspeople such as Zelda Winston (Tilda Swinton), who recently bought the funeral home, beheads the reanimated corpses with her sword and Hermit Bob (Tom Waits) spies on them from a distance and observes the zombie apocalypse.

The Dead Don’t Die is not the chaotic and adventurous zombie movies that are presented in the genre. There is a chaotic calmness that lingers on the surface of the movie that is filled with dry gags of the gradual slaughter of the citizens of Centreville. When Cliff, Ronnie and Officer Mindy Morrison (Chloë Sevigny) arrive at the diner to inspect the murder by the undead, each of the characters asks whether the assault was committed by “a wild animal”, followed by “several wild animals”. This dialogue is repeated within the three characters, and that is how the movie deals with the running humour. Sometimes, The Dead Don’t Die seems as though it’s a movie within a movie. Throughout the film, Ronnie implores that things are going to end badly, hinting at the obvious ending of the movie.  At the beginning of the film, as Cliff and Ronnie are heading to the station, the song “The Dead Don’t Die” by Sturgill Simpson plays on the radio and Ronnie says, “It’s the theme song”. This song also happens to play throughout the film. Towards the end of the movie, Cliff notes that Ronnie’s calmness and asks how he knows that everything is going to end badly. When Ronnie reveals that the director Jim had given him the whole script of the movie, Cliff gets frustrated that he was only given the scripts for their scenes together. At the moment, when the fourth wall is broken, it’s clear that the movie wants to prove a point. This is not the first time the fourth wall had been broken. Bobby Wiggins (Caleb Landry Jones), who owns the gas station/comic book store, knows how to survive the zombie apocalypse and tries to help Hank (Danny Glover) to survive it. Everybody in Centreville is destined to die, according to Jarmusch, but Zelda and Hermit Bob are the only people that survive it.

The sword-wielding morgue attendant, Zelda, who has a unique personality and a Scottish accent, slashes the undead nonchalantly. In a scene where Zelda is preparing two corpses for viewing, she applies colourful makeup and communicates with them. She tells them that they would have been “the king and queen of the golf club”. The moment when the female corpse opens her eyes is captured in an aerial shot, Zelda seems slightly surprised but unfazed at it and continues to do her work. Then, the male corpse’s eyes open, Zelda closes them. This action repeats, and Zelda asks them if they are in this together, commenting on how inappropriate it is that she has to keep closing their eyes. The two corpses sit upright and Zelda picks up her katana and slashes their heads. When she goes out to help the police officers at the station, she walks amongst the zombies and does not react to them. At the end of the movie, Zelda has beamed away into a UFO and flies away. The movie does not answer why she is killing zombies or whether she has been doing it all her life. The formidably weird characteristics of Zelda have some irksome and mysterious elements to the movie.

Another character, Hermit Bob witnesses the zombie apocalypse who spies on the events behind the bushes. Just like Zelda, he survives the apocalypse, and the audience is left with the mysteriousness of whether he knew about surviving zombies or not. He watches over the hilltops as Officers Cliff and Ronnie dig a grave at the cemetery, while they discuss whether they should inform him about the zombies. Unlike Zelda, Hermit Bob does not provide a helping hand and observes in the distance with his binoculars as Cliff, Ronnie and everybody else turn into a zombie. He makes the smart move to stay away from the invasion and while the world slowly gets overwhelmed by zombies, he narrates that the world is a terrible place, criticizing the characters and offering commentary on consumerism greed. That is why Hermit Bob is the only one that survives the apocalypse because he is the only one that is not obsessed with consumerism and greed.

As for the undead zombies that appear in the small town of Centreville, their cravings are meaty and weirdly odd at times. As the two zombies slaughter the diner employees, they get distracted by coffee. One of the zombies, played by Sara Driver yells “coffee” at her zombie companion played by Iggy Pop yells the same line too. Both of them walk out of the diner with the coffee pot in their hand. The other undead zombies mumble words of objects that they were consumed by when they were alive.

The Dead Don’t Die is quirky, fun and chaotic, and certainly, not for everyone. The movie does not provide any background on why the zombie apocalypse happens, but that is the beauty of it all. Its simplicity and apocalyptic style have quirky characters, deadpan moments, and the titular song that plays over and over again, foreshadowing the impending doom. The film addresses social commentary on environmental concerns and consumerist greed that ties well with the characters’ roles. Maybe Jarmusch’s movie reinvents the zombie genre which is known for its chaotic and adventurous plots and adds a new sense of calmness far from its predecessors like Zombieland and Shaun of the Dead after many years.