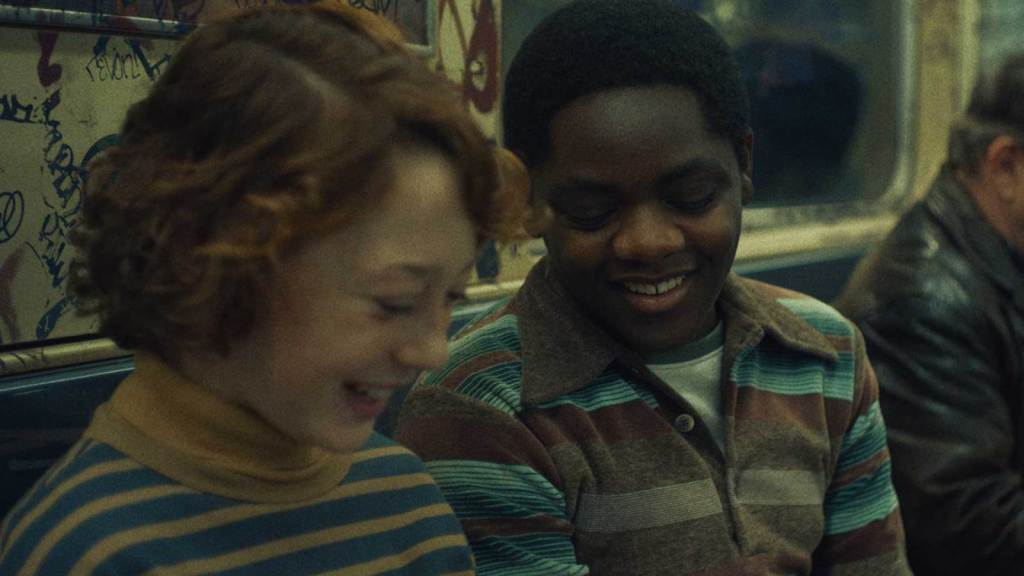 Armageddon Time may not be James Gray’s best feature to date. Still, it is undoubtedly his most personal, as he reflects on his innocence at a time of moral corruption and trepidation – anchored by a great trio of supporting performances in Anthony Hopkins, Anne Hathaway, and Jeremy Strong.

Over the past few years, specifically since 2018, there have been a few quotes or remarks that have broadened my thoughts on what home (and the aspect of it all) means to me. And as you age, there’s a feeling that time is passing by quickly, more so than usual, as if it was running at one hundred miles per hour; those passages that I have kept with me are held on a pedestal that has helped me grow as a person. One of them is short but truly impactful: the classic quote that Jimmie Fails’ character says in The Last Black Man in San Francisco, “You Can’t Hate San Francisco Unless You Love San Francisco.” Why has this quote indeed pierced my soul? Because when you think about it, everybody complains about their hometown or place of birth, from the cracks on the streets that deteriorate your car’s wheels to the injustices made by the politicians – at least in my hometown, that’s the case; everybody has their variations of this pendulum. And the more they complain, the bigger the affection that person has for their hometown. They want it to change but, at the same time, love it from top to bottom.

The other quote is a more recent one by one of the best American filmmakers working today, James Gray, during the Cannes press conference of his latest film. Gray often told stories about his childhood and growing up in New York to his kids. They were entranced by the stories he told them, to the point that he took them on a trip there to revisit some of the places he went to when he was a kid, but something felt off. Gray and his kids felt that the scenery they were looking at was like a puzzle with a few missing pieces. Gray didn’t recognize what he saw, and his kids thought the visualization in their minds differed from what they encountered. The cold heart of modernization has caused this nostalgia for home to feel a fixation from one’s imagination. When you go back to those places and don’t see them anymore, it feels as if your identity and culture are being erased, which is heartbreaking and frightening when you think about it deeply.

This feeling paved the way for James Gray’s latest directorial outing, Armageddon Time – a coming-of-age film based on his childhood in Queens during a time of significant change and fractures in morality amidst the people. This is James Gray’s most personal work to date, one that’s funny, emotionally moving, and also quite stirring in its true-to-life depiction of what 80s America, specifically New York, was like when Ronald Reagan crawled into power for his term as President of the United States. The atmosphere and setting have always been essential factors in Gray’s films. You can sense its setting from the beginning (thanks to its graffiti logo). And right from the get-go, you are immersed in early 80s New York, where there’s a division between the clean-cut suburbs, the trepidation amidst political change, and the griminess of the city. Although there isn’t much focus on the latter, it is a sensation often felt in films set around the Big Apple.

Strangely, Armageddon Time feels as if it was concocted from an autobiographical novella, where Gray pours his heart and goes deeply personal while adding some dramatic embellishments to help maneuver the cinematic venture this project might take; all of the events transpiring in the movie happened to him. Set in the public school system of 1980s Queens, a young white Jewish pre-teen Paul Graff (Michael Banks Repeta, who plays a character loosely based on Gray himself), wants to be an artist. He often daydreams of being a painter, a creator of inspiring works that would one day achieve a stamp in the history books. However, once he and his friend, Johnny (Jaylin Webb), get in trouble with the school board and law, their dreams begin to crash into the harsh reality of Reagan-era New York. Paul starts to see the harsh realities and injustices of the world during a time of moral corruption, prejudice, and disruption – contemplating the possibility that he might lose the people he loves the most.

Armageddon Time has James Gray looking at his past and reflecting on the decisions his parents and himself made during that time. Gray doesn’t shy away from presenting how trauma has shaped his life; the wounding guilt has forged his identity in the same amount as the Wassily Kandinsky paintings he saw at the Guggenheim Museum. In addition, there are talks about white privilege, iniquity curated by injustice and grievance, and losing one’s innocence to become a man. It’s pretty moving because the film portrays all of this without dwelling on the coming-of-age genre trappings; instead, it relies on a humanistic approach (the best and only way to tell these types of stories), which causes a more profound impact and food for thought while watching. Most of us have been growing tired of these types of films that have directors exploring their youths, as each year with getting one or two of them; however, Gray injects new vitality and thoughtfulness into a story that could have been one of the many released in the past few years.

Armageddon Time doesn’t have the emotional tug-of-war that Two Lovers (2008) has, but it does contain the piercing factor that helps its dramatic beats to have a more profound effect. The scenes with the most significant emotional pull are those of realization and consolation. The former are primarily scenes where the young Paul Graff slowly learns about how people treat others – from the moments of serenity to those cruel moments of prejudice. The latter revolves around Paul’s conversations with his grandfather, Aaron (played by the excellent Anthony Hopkins). Aaron sits him down and talks to him about his past and how his mother escaped to America because of the Nazis. That story haunts Paul at night, but it helps him to see that the world hasn’t changed; there are still people who feed on hate. “You can’t ever forget the past,” Aaron says to Paul, which is a quote that reflects on how he has to cherish his family dearly and the hateful acts that transpire over and over again over time. It is a fight for survival in the dog-eat-dog society of the Reagan era. You could see the harsh truths of discrimination and indictment everywhere you’d go (the subway, school, home).

Although it tackles all the topics that come with the times, Armageddon Time is also a film about goodbyes – a humanistic anomaly about loss. His innocence is beginning to be erased, and he loses his grandfather, the only person he can trust to talk to him straight about his thoughts on everything. Life will never be the same for the aspiring artist after those two minor fractures in his heart. And the film’s ending showcases that he is still trying to grasp the world and would like it to change. Maybe through his art, the young man might try to search for ways in which that could help. Moral decadence is all over the picture, demonstrating that the hate we see today grew from seeds that were planted long before most of us were even born – the armageddon in its title is a combination of covetousness, avarice, bias, dread, and self-preservation. The film is concocted with honesty and sincerity, as well as the needed harshness to tackle such topics; in the end, it results in an exploration of one’s past, where one loses their innocence as part of knowing more about the world we live in. It isn’t James Gray’s best feature, but it is undoubtedly a piercing and riveting one like he’s used to delivering.