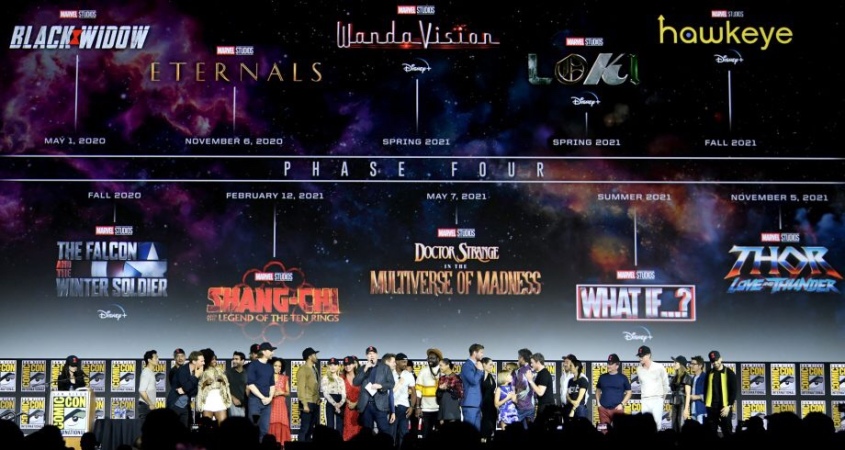 It’s been almost 48 hours and I still can’t believe what Marvel announced in Hall H during this year’s San Diego Comic-Con. In the past, I have been one of those who have criticized Marvel for simply doing the bare minimum when it came to diversity and always tapping itself on the back when it came to praises. I even wrote on here about that token moment in Endgame and how Marvel needed to do better.

And then on Saturday night, during Comic-Con, Marvel blew my mind. During the panel, I was watching Do The Right Thing in theatres on 35mm for the first time and I was already more than emotional when I walked out. So to opened my twitter feed and saw everything that had happened, my jaw was on the floor. Since then, I have been trying to process it all. Just to recap, in 2 years Marvel is going to release 10 projects, 7 of those in 2021. And that’s insane. But what’s even more insane is the lineup of everything that was announced.

See it wasn’t the normal announcement, no it was Marvel but on steroids. Here’s everything that was announced.

Not only that but it was also announced that Black Panther 2, Captain Marvel 2, Guardians of the Galaxy 3, Fantastic Four and some mutants are all coming for Phase 5. But the cake was when Mahershala Ali walked out and was announced as Blade.

Just that is impressive in itself but I think what takes the cake is what that means for the future of the MCU. Because all these projects are more diverse than the entire three phases of the MCU. So let’s look a little bit more in-depth of what that is and what it means.

The diversity in this lineup is not just tokenism, which is something Marvel has been accused of. It took them long enough to get here but here we are. First the directing, of the five movies announced only one is directed by a white man, Doctor Strange in the Multiverse of Madness by returning director Scott Derrickson. The rest are by women or men of color. For a company that prior to that had almost only hired white man to direct their film, it’s a pretty big thing. Then you look at the cast of these movies. Diverse with women at the centre. It’s a nice change from the early years where every movie was lead by a white man. And even when a movie is with a white man at the centre of it, a woman is by his side as his equal.

In the Eternals only one white man is in the main cast, Richard Madden but even then the character that he will be playing in the movie is gay in the comic. The cast that surrounds him is composed of what is one of the most diverse casts ever. Characters have been gender swapped, most notably Selma Hayek’s character, Ajak the leader of the group, and Lauren Ridloff’s Makkari has not only been gender swapped but will also be the first deaf superhero in the MCU.

I could go on and talk about every movie, Shang-Chi will be composed of mostly Asian characters, The Falcon and The Winter Soldier will introduce Sam Wilson as Captain America, Doctor Strange will have Elizabeth Olsen as Scarlet Witch by his side and in her own series, we will see an adult Monica Rambeau from Captain Marvel played by Tayona Parrish. And the list goes on, but I think that what took the cake for almost everyone (outside of Blade being introduced to us) was the announcements made for the new Thor.

Now, you should know that Thor is my favourite Avengers. While he never was near the top of them, Thor Ragnarok changed everything and he crept up in my heart only to become my favourite Avengers. So for him to be the only original Avengers to get another movie made me happy and then the panel happened. Not only is Hemsworth back but Taika Waititi is back as the writer/director and Tessa Thompson is also back as Valkyrie. And according to Tessa Thompson the first order of business is to get her a Queen. And that makes me so excited because after Ragnarok came out and it got out that a scene was cut that would have revealed her character to be bisexual I was crushed. This is one representation I really wanted and the fact that Marvel would just cut the scene made me sad and mad. So the fact that they said that they confirmed that Marvel would finally have an LGBTQ+ character I couldn’t help but say about damn time.

And then Marvel kicked it up a notch when they told the crowd and everyone at home that Natalie Portman would not only come back but she would be back to wield the hammer as well. Natalie Portman who had left the MCU because she hated being the simple love interest came back because they decided to make her the titular character. Marvel got back an Academy Award nominee by doing the opposite of what she had been doing for so long and that is incredible. Now most people and outlets have been calling her the female Thor but I refuse to do so. She is Thor or Jane Thor and that will be the only way I will forever call her.

Now, I am not saying Marvel is perfect. While this is insane progress, it still took them more than 10 years to get to this. But it’s progress that I will take because while it might have taken them too long to get here, at least they are here and they don’t seem to be turning away. It’s a new Era in the Marvel Cinematic Universe and I am more than ready for it.