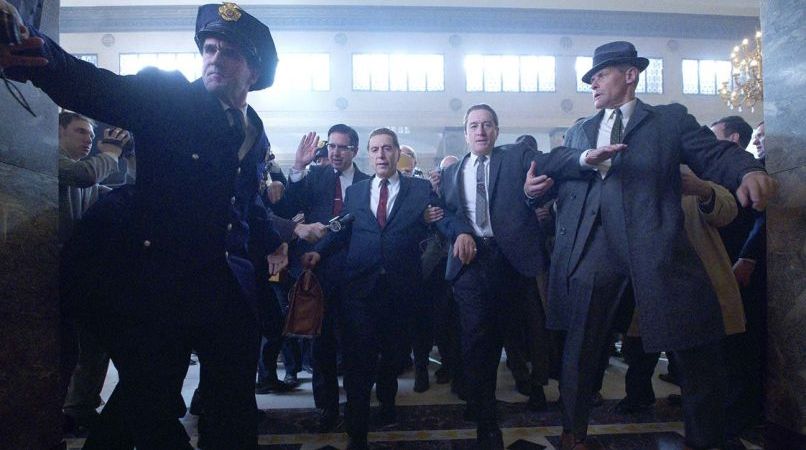 Honestly, just because you can de-age someone, doesn’t necessarily mean that you should. And yes, it’s so good, we had to write about it twice.

What feels like a lifetime ago, I wrote an article about Netflix and its original programming. Even then, I knew it was only a matter of time before we got bigger projects to appear exclusively for Netflix, but I never thought we would get a Martin Scorsese picture.

Why did Netflix fund the passion project? Besides just because they can, because it’s harder to get people into theatres to watch a three and a half-hour film. My screening was at 10 am and there was a very brief moment of me questioning if I have to see it. The answer was yes, of course, I do. And I’m very glad I had the opportunity to see it on the big screen (and if you live in Toronto, you can see it now at the TIFF Bell Lightbox). Yes, the film is long, but I never really felt it’s length. Only near the end of the film, but that was only due to the water I drank during the duration of the film. The positive of the film going straight to streaming services is that you would be able to pause the film for washroom breaks – but you also probably would check your Facebook or Twitter feeds if you were in the comfort of your living room.

The Irishman stars Robert De Niro as Frank Sheeran, Al Pacino as Jimmy Hoffa and coming out of his retirement, Joe Pesci as Russell Bufalino. I didn’t realize how much I missed Pesci’s presence until he appeared on the screen. The film follows Frank, as he remembers his life as a hitman while working with big mob bosses and including Jimmy Hoffa himself.

There are moments in the film in which we shy away from the violence, and there are moments we lean into the brutality of it all. The film is almost reminiscent of prior crime films that Scorsese has made, except this time, Scorsese isn’t proud of the violence. Frank may continue to be a hitman until it’s too late, but as he’s older, and then it lays heavy on him. You can see how he stays to be the last man standing, and he tries his best to stand tall. He doesn’t bulge, but he tries to talk to God as he’s sad for what he has done.

The Irishman is a film that’s made with wisdom, the understanding of recollecting your past. Or living with your regrets. A film that makes an argument for the streaming service while demanding to be seen on the biggest screen possible.