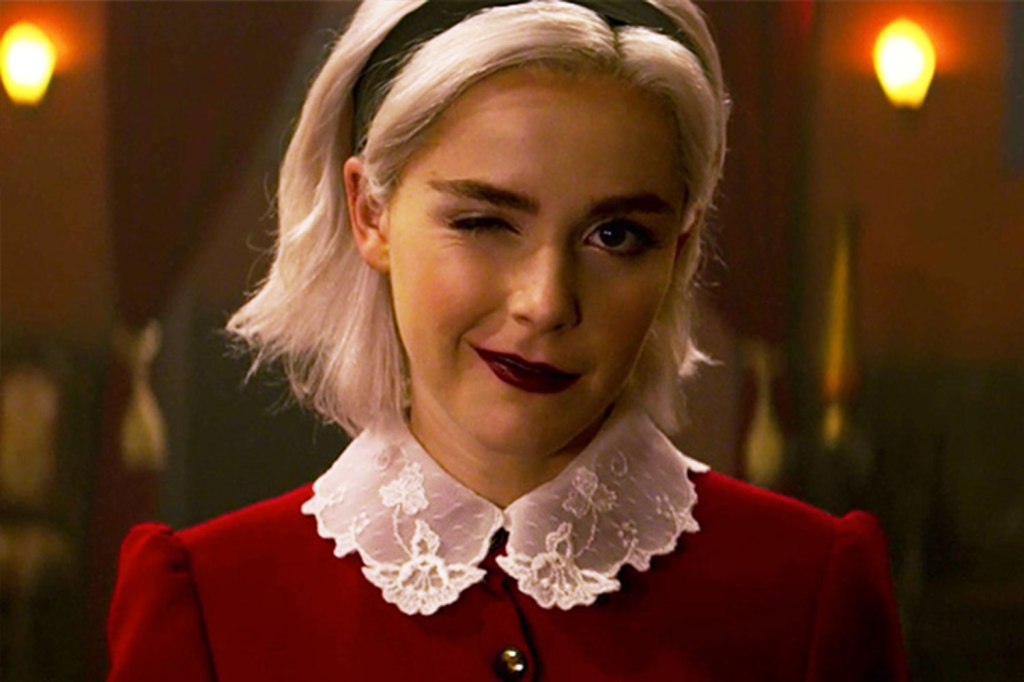 The big question for this highly anticipated new season has been, will it live up to its exhilarating and remarkable season two? Well, it does and it doesn’t. Chilling Adventures continues to stun us with its haunting and gorgeous imagery along with its beloved and thoroughly fleshed out characters that we continue to enjoy and relate to. The campiness factor remains intact this season all the while taking itself more seriously than the previous two. But the whole time, I couldn’t help but think something seems off. Before I jump into my thoughts, there will be some brief spoilers regarding season two and some talk of storylines set up by episode one so if you haven’t seen the previous season yet I recommend watching it before reading this review.

Wasting no time at all, part three jumps right into the complications left over from the previous installment. The principal one being that Sabrina’s boyfriend Nick is still trapped in hell with the devil confined within him. Thank god they tie this up early because it even feels dragged out when it crosses over into the leading episodes. What works well with this arc is that it deals heavily with trauma and portrays it in a way that feels so human even when dealing with otherworldly circumstances. Of course, the two lovers can’t jump right into a healthy relationship considering one just spent a month fighting for dominance and power over their own body with Lucifer, all for the other. There’s bound to be poor coping mechanisms and some sort of resentment within that and the writers respectfully put aside any fan ‘ships’ to deal with the situation. This storyline in the new season gives us a view to another side of the typical bad boy character and gives actor Gavin Leatherwood lots to work with; and trust me, he does not disappoint. Leatherwood gives a vulnerable and grueling performance as a teenager dealing with PTSD in an age where men are still expected to hide their grief and emotional states. It’s a sad and honest performance that I commend him on.

Another character who stood out from the others this season is Theo, played by Lachlan Watson (Drop Dead Diva, Nashville). Theo has been an important character from the very first episode of the series as we watched them transition from Susie, a panicky, uneasy young person; to the brave and strong man he is now. A love interest in the form of a new kid to Greendale gives us a new queer romance that drives the season in many different forms. Although the show has not shied away from its LGBTQ+ representation and arcs, Theo has been due for his and does it ever deliver. Aside from this, Watsons’ acting compared to the first season has evolved exceedingly. Their range has grown a great deal as can be seen from the very first chapter of season 3, where they give a powerful performance during one of the darkest moments of the show.

The new season above all has proven itself to be the most wicked and brutal one yet. Although this show is aimed at teens, they completely amped up the violence and horror leaving even myself, a horror junkie, with my jaw propped open. There are deaths and sequences straight out of a slasher even, one of which includes a body being contorted and snapped in all locations by the hands of voodoo. It’s more unpredictable than ever with twists at every turn during the latter half that is truly shocking. That being said, it doesn’t excuse the slow build-up of its antagonists, which I will not spoil. The antagonists this season are extremely powerful and cause a disturbing chain of events that should have come sooner than later. But when it finally rains, it pours. Trust me when I say the build-up is worth its very climactic finale.

As a fan of Chilling Adventures, I was rooting for this to be a successful chapter in the show and it delivered on most parts. A series like Sabrina in so many ways could have turned into a melodramatic guilty pleasure for teens but it proved that this intention was nowhere in the cards. Season three has given birth to so many iconic moments that fans will latch on to and remember just like I have, it’s meaner, unapologetically violent and Kiernan Shipka (Mad Men, Carriers) continues to deliver an impressive spin on a character many of us have cherished since our youth. Even though it doesn’t quite live up to all of the expectations set upon by its second season, season three is a hell of a ride and stands as a strong set up for its next chapter; and I can’t wait to see where it goes.