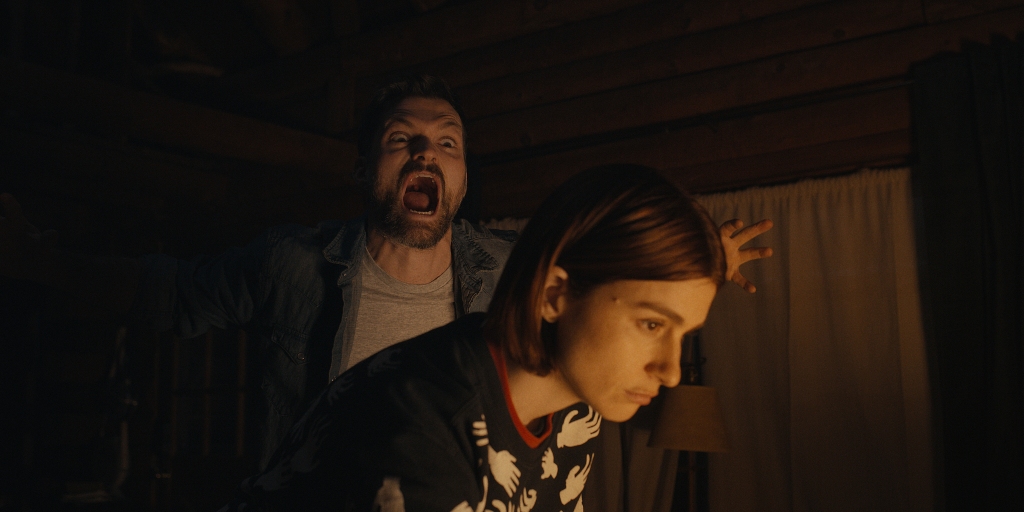 Scare Me is directed by Josh Ruben (best known for his work on CollegeHumor). He also plays Fred, an aspiring novelist who goes to a cabin to focus on writing his book. He meets Fanny (Aya Cash), a bestselling horror author also working on her next novel. When the power goes out, Fanny makes her way over to Fred’s cabin and they enter a competition to tell the best scary story.

I was never a big fan of CollegeHumor even in the height of its popularity. I’ve always appreciated their content and quite enjoyed Adam Ruins Everything, but it was never my go-to for comedy. Regardless, when I heard Scare Me is Ruben’s directorial debut, I was curious yet apprehensive.  By the end, those mixed feelings did not dissipate. There is a lot to like, and also some decisions I questioned. Ruben takes the vibe of classic campfire storytelling with some experimental approaches that are hilarious yet creepy. It makes for a great movie to watch with friends that will spark some of your own storytelling afterwards. The use of sound effects amplified the atmosphere created for each story. As the characters become more invested in each other’s tales so do you.

Fred and Fanny have great banter that toes the lines of playful and animosity. Fanny has an air of snobbiness that highlights the subtle jealousy and insecurities that Fred is grappling with. Cash is such a delight to watch as she embodies each new character during her turn to tell a story. With that said, Fanny felt like a missed opportunity. I found myself longing to know more about her. There are many moments that could have dropped tidbits of her background story. Fred received those moments, but Fanny was really neglected in that sense.

For the movie to have Fanny as clear feminist character, that directly mentions the Bechdel test, it’s quite ironic Scare Me fails it. Granted, I’m not a supporter of the Bechdel test as a tool to gauge the representation of women in film. Quite frankly it’s far too simplistic being that the only requirements are:

It is the bare minimum any film can do. Similarly, the use of Chris Redd’s character Carlo reminded me of the New York Times article Sundance Fights Tide With Films Like ‘The Birth of a Nation’ by Manohla Dargis. She refers to the DuVernay test, named after director Ava DuVernay, as a gauge for meaningful diversity “in which African-Americans and other minorities have fully realized lives rather than serve as scenery in white stories.” Carlo conveniently disappears from work for two hours without anyone checking in on him, tells a story, and leaves. He is used as a tool to ensure the film doesn’t become too redundant which is a disappointing use of an actor who is extremely talented. I recognize this a small budget with a limited amount of characters but there are always opportunities to ensure side characters aren’t castaways.

A moment that makes up for some of the shortcomings is the stark tonal shift that I absolutely loved. The feeling reminds me of those moments when someone says something you’re not sure is a joke and you laugh, only to realize no one is laughing with you. In just a few minutes, the film went in a completely different, yet welcomed direction. Ruden’s ability to transition from a bitter yet likeable wannabe to someone more sinister makes me excited for the roles he takes on next.

Scare Me definitely tips far more towards comedy than horror yet kept some of the classic elements from the horror genre. There are some hits and misses but overall Josh Ruben made a good debut and I’m looking forward to his next project.