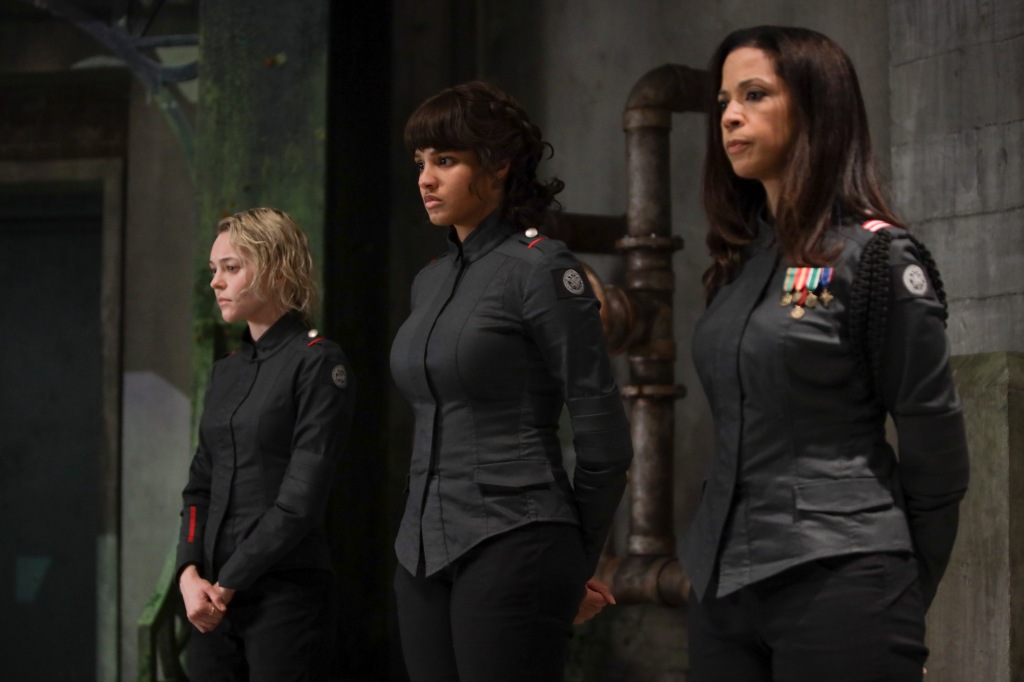 MOTHERLAND: FORT SALEM - "Of the Blood" - Despite the threat of the Camarilla, the discovery of new witches gives Alder hope. Tally struggles with her role as a Biddy, and Raelle and Abigail return to Fort Salem with their mysterious new abilities. The Season 2 premiere of "Motherland: Fort Salem" airs Tuesday, June 22 at 10:00p.m. ET/PT on Freeform. (Freeform/Jeff Petry) TAYLOR HICKSON, ASHLEY NICOLE WILLIAMS, CATHERINE LOUGH HAGGQUIST

(Please note this review only pertains to the first two episodes of the second season and will have some light spoilers for the first season of the show.)

Motherland: Fort Salem was a nice surprise when it first premiered last year. I didn’t go in with high expectations, but after watching the trailer I was excited about a new witch show. While the first season wasn’t perfect, the world-building and the characters are what brought me back each week to the show.

The first season of Motherland: Fort Salem build a world that was detailed and rich in history. A show that felt lived in and where we could tell centuries of history lived through the action of the characters. It might have been hard to follow at times because of how vast the world was, but it was one of those shows where its ambition never pulled me away, it was the other way around.

But what is Motherland: Fort Salem about? It follows Raelle Collar (Taylor Hickson), Abigail Bellweather (Ashley Nicole Williams) and Tally Craven (Jessica Sutton), three witches who are enlisted in the U.S. Army. They train in combat magic and use their vocal cords to enact “seeds” or “seed sounds”, layering vocal sounds to create powerful spells. The show takes place in a women-dominated world in which the U.S. ended the persecution of witches 300 years ago during the Salem witch trials after an agreement known as the Salem Accord. The world finds itself at odds with a terrorist organization known as the Spree, a group of witches against the military conscription of witches.

Yes, this premise might seem over-complicated, but the truth is that the show is really about Raelle, Abigail and Tally. The bond they form and their friendship drives everything in the show and if you need a reason to go in and watch it, use that. This trio might start on a rocky foot but by the end of the first season, they are a trio that is a force to be reckoned with. I was scared by the way the first season ended that they would be separated for a while, but the show wastes no time in reuniting them. It’s something I command because they could have wasted their premiere episode to tell us every single detail into what happened in between the seasons. Instead, the first episode goes to such a rapid pace that what I thought would take five or six episodes to resolves is solved in less than half an hour. It’s ambitious, especially after leaving us for months on the cliffhanger of the last season, and yet, it works.

The first two episodes are a great introduction to what this season will be about. If the first season was all about the Spree and the trio’s journey in the Army, the second decides to show us that there is something worst out there and that our heroes aren’t ready for it. We were teased about The Camarilla (witch hunters that were believed to be instinct) during the first season but the second season seems to be setting them up to be the big bad. But of course, that doesn’t mean the Spree are completely forgotten for good, instead, they become their own story, even more, this season. With the reveal of Raelle’s mother at the end of the first season, this isn’t difficult to predict but from the first two episodes, I can already tell it will be one of the most important storylines of the season.

If the trio of Raelle, Abigail and Tally stay at the center of the show, it’s clear the show is about to explore more of the other characters. We know our main trio, we know what to expect from them so now it’s time to explore the rest. If the first season teased General Alder (newly promoted series regular Lyne Renée), the second season will explore her more and they don’t waste any time in doing so. After all, she is a 300 years old witch who was there to sign the Salem Accord and we haven’t even scratched the surface of her backstory. And it is clear that this is what the second season will be able to do, explore those characters that we just haven’t been able to during the first season.

This brings me to Anacostia (Demetria McKinney) and Scylla (Amalia Holm). A lot of people online have talked about how Anacostia, and Demetria to an extend, has been absent from most of the promotion of the show. While I don’t want to spoil the reason for that, I will say that there is a good one and you should not be worried. From what I have seen of the first two episodes, they would not have been able to use a lot of her scenes to promote the show because her story is so spoiler-heavy. Her story this season will probably be one of the more important ones, a story that was briefly hinted at during the end of the first season. It is clear that the writers plan to explore not only her interest in the Spree but also the consequences of her actions by letting Scylla go by the end of the first season. It’s a dynamic that sold me during their limited screentime during the first season and with the two episodes, it is clear that it’s a dynamic that the writers love too. They are so different and yet, too similar.