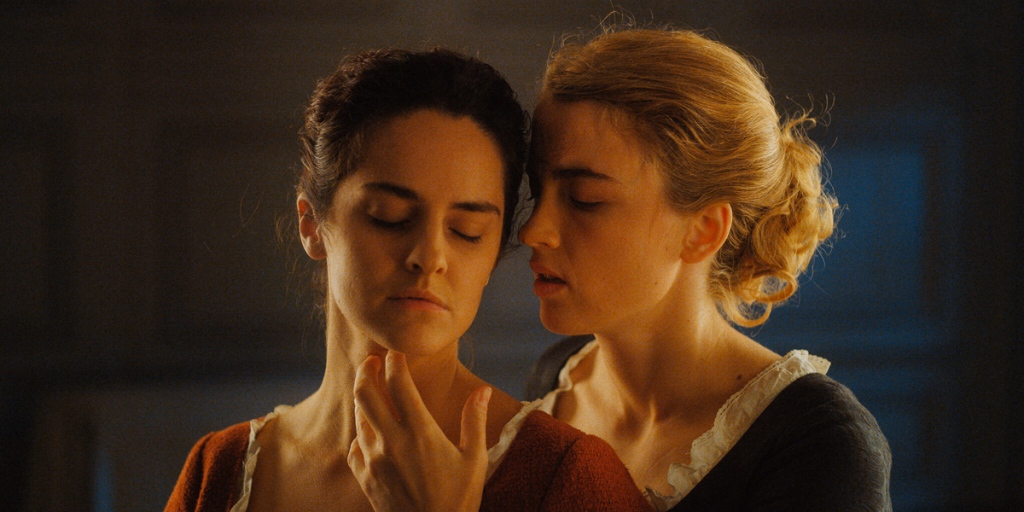 Movies make you feel things. Those feelings can vary from films to films but they are supposed to be there. Walking away from a film feeling nothing is never something that should happen. And then there are the movies that make you feel everything, overwhelms your sensations and make you question everything you think you know For me, Portrait of a Lady on Fire did just that. It’s not that it’s emotional per se, it’s more of a feeling that the movie gives you. While there is some moment that will bring you to tears, the atmosphere and story itself make you feel. Films that are able to set feelings without really trying are unique, they are in a category of their own, at least for me. I hate to compare films, I think it doesn’t do justice to them really. But if I had to compare Portrait of a Lady on Fire to another one, in terms of the way emotions, or at least what it made me feel, I would compare it to Call Me By Your Name. Let me tell you why.

Portrait of a Lady on Fire doesn’t reinvent the story that we seem to know within the confine of LGBTQ+ films. Two women meet and fall in love during a time period where this kind of relationship wasn’t acceptable. It’s nothing new, it’s not even extraordinary but what brings it to another level is the way the script flows, the way the scenery is set and most importantly how every single aspect of the film work perfectly with one another. It’s hard to describe what you feel when you watch it but the palpable tension between its two leading ladies brings the film into another dimension. Gazes, looks, silence bring so many emotions in this film that you don’t even need the dialogue. Everything is said without speaking a word and then they speak and the world stops moving just for a second. What this film does best is transport you into their world, you are with them, hanging on every word just like they are hanging on to each other. It’s a work of art, a work of art just like the paintings that are in this film. Art is synonymous with this film.

Sometimes story like the one in this film feel rush, but in Portrait of a Lady on Fire it feels appropriate, it feels like that love is genuine. And that is a lot due to the great chemistry of it’s two leading actresses, Noémie Merlant and Adèle Haenel. They don’t need any word spoken to make you feel, just looks and you know. And they are so good at letting the emotion change as time past and the characters slowly fall for one another. Their performances really anchor the film and because of them, the film is elevated. My favourite scene, where I believe the acting is at it’s best, is towards the middle where the two start telling each other what they have observed about each other’s behaviour. It’s a scene that is there to show how they have grown to know each other and seems pretty innocent but the way it’s acted just makes it so much better, it makes it real. Good acting isn’t rare but great acting, acting that combined with a script that is so good can create art. This is what Portrait of a Lady on Fire does so well; it creates art.

Portrait of a Lady on Fire reminds me the most of Call Me By Your Name when it comes to the ending. Endings are ticky in films, too often they feel not completed and leave you wanting more. Portrait of a Lady on Fire does make you want more but it also brings it all home with one final montage. I usually don’t like montage at the end of a film because they too often feel like cheating, a way to fast-forward to the ending when there’s still so much to say. But even without that ending, Portrait of a Lady on Fire would have worked. But that little ending, that montage that shows us just a snippet of the after the story brought me to tears. And just like with Call Me By Your Name the last shot leaves you an impression, in one shot the film is brought home and everything just works even better.

Portrait of a Lady on Fire is a work of art, represented perfectly by the art itself in the film. Every frame is a painting in itself, taking you on the journey of these two lovers that you know are doomed and yet end up falling for them just as they end up falling for each other. Even when everything ends, you are left with the emotions that this film brought you, just like they were left with their own. It’s a love story told with so much love that it bleeds through the screen and you can’t help but feel embraced by all of it.