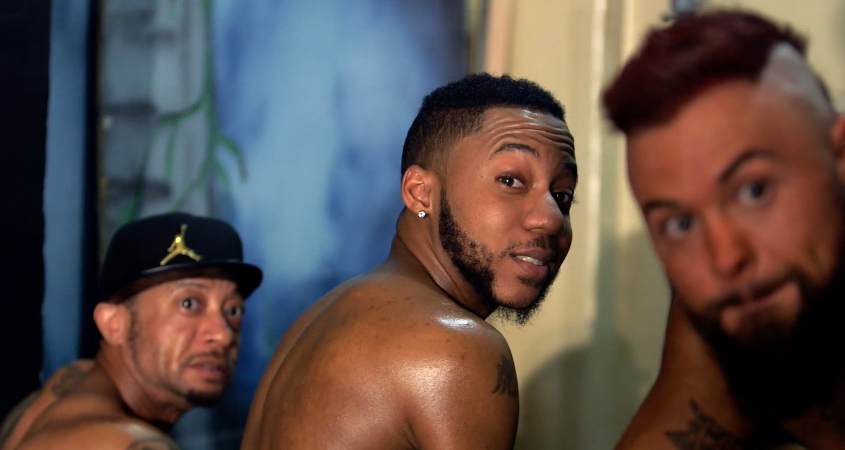 Identity is something that defines you when you are part of the LGBTQ+ community. It’s a question that you wrestle with most of your life and sometimes it takes forever to answer it, sometimes you can never truly become yourself. Maybe that is why Man Made is so touching, so powerful. Because it’s about men finally being themselves, putting themselves out there and being true to themselves. It’s admirable, to say the least, and it’s a subject we don’t talk enough about and is not seen enough in film, fiction or not.

Man Made is a documentary about the world of bodybuilding but focuses instead on a group of transgender men who struggle in their journey to be who they want to be, who they always were. Rese a young father who struggles with periods of homelessness, Dominic who seeks out his family’s origin, Kennie who finally admits to himself and his family who is is and Mason, a husband who struggles with mental illness. In T Cooper’s first documentary, we follow these men’s journey and their emotional and physical journeys. In today’s world, these men put everything on the line to be themselves, for them it’s not about winning but instead about being seen.

What makes this documentary so powerful is the story of these men. The competition itself, the only trans-bodybuilding competition in the world, isn’t even the most important part of the film. The men themselves are. Bodybuilding is about putting your body out there, getting judged on it, winning or losing depending on it. For a transgender man, someone who has probably struggled with their body image their whole life to decide and go put yourself out there takes courage. The courage that these men exhibit is simply incredible and remarkable. You can’t help but root for them and as you learn more about who they are and what they have been going through and the struggles they still face, it’s impossible to not feel a sense of pride for them.

A film that deals with the story of transgender men would be impossible to do and not address the social climate of the world we live in. As each of them navigate the different stages of their lives, they are faced with the challenges of today’s world. The social commentary of the film merges itself perfectly. Creating a riveting story about our society and how we perceive the world. I strongly think that transgender men or women are some of the strongest people because they are willing to put everything on the line to be themselves. The journey to be themselves is a hard one and the film does a good job of painting a portrait of how their journey to be themselves correlate to their journey in the world of bodybuilding.

Building the life you want is hard, even harder when it comes to the constant weight of the world looking at you. Being transgender and bodybuilder cannot be easy, already being a bodybuilder is one of the hardest disciplines to master and then put on top of that the transformation that your body goes through when you transition in order to finally be yourself, it must be a journey that is so hard but also rewarding. And the film does a great job of showing that. You are invested in their story and journey, you want to see them succeed and accomplish everything they want. The lense that is used to tell the story to breathe respect and the POV that is used works perfectly. Man Made stays with you and creates a sentiment that you can’t forget. It’s a film that is important and shed a light on a subject we don’t talk about enough.

You can catch Man Made on VOD platforms on Thursday, November 7th, 2019 via Journeyman Pictures.