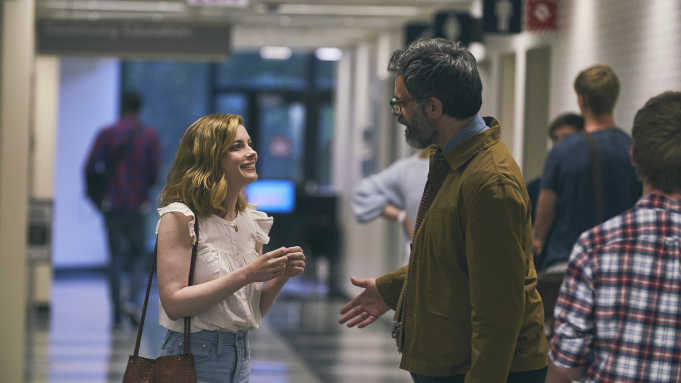 I will be super honest here, writing this review might just be the hardest thing I have had to write in a very long time. Not because I Used To Go Here isn’t good, that would have been much easier in all honesty. No, it’s because I Used To Go Here is actually a really good film in the grand scheme of things, but the main problem I had with this is that I found myself bored out of my mind while watching it. I had to watch it twice in order to be able to write this and even on my second viewing I found myself bored and just wanting to do anything else really.

Following the lacklustre debut of her first novel, Kate (Community’s Gillian Jacobs) finds herself in a bit of a depressive state and finds her life to be anything but what she imagined. Her best friends are all coupled up and expecting while she is alone and the only thing that was keeping her going, her book tour, is cancelled because of the underwhelming success of her novel. After her old college professor (and crush) David (What We Do In The Shadows’ Jermaine Clement) invites to come to her old college as a published author. Hoping it might give her the morale boost that she needs, she finds herself thrown back into the world that she knew way back when. From going by to the misadventures of college with twenty-years olds students to being jealous of David’s new favourite student, Kate must confront her past and what her future involves.

What I will give to this film is that the acting is on point. This might be the best acting we have gotten from Gillian Jacobs. She has always been a great actress but this might be the role that she had been waiting for because she doesn’t miss one bit and gives a compelling and nuanced performance. Her timing against one of the great that is Jermaine Clement is always perfect and she can hold her own against him. The two and their chemistry do most of the heavy lifting in the film but their supporting cast is also superb. There’s nothing that I can truly knock on the acting front for this film really because everyone is always on point but even that couldn’t save me from my boredom while watching it.

I don’t know if it’s because I expected to laugh non-stop because of the two leads, but I Used To Go There just didn’t make me feel what I wanted to feel. And maybe that is the reason why I was so disappointed with this one. The film is clearly an exploration of millennial ennui and what my generation sees as their path to what will make them happy. Kate is the typical millennial that the media loves to portray. The kid who had dreams but didn’t feel complete once it finally arrived. The thing is, maybe it’s because of where I am in my life, I just couldn’t connect to that. Maybe it’s because I don’t strive to go back to college or my past, but Kate’s desire to not have anything change just felt like it was her whining about wanting more then what was given to her. The exploration of ennui and what it does do us is interesting, I just found myself bored while watching it in all honesty. The slow pace might be for some, but it just wasn’t for me.

I wish I enjoyed this film. I truly do, it was well made, an interesting subject and a great cast. But the fact remains that I just couldn’t find myself enjoying it. And that happens, it might not be for me but it will probably be for someone else. Maybe I will revisit it one day and see how wrong I was, how much of a masterpiece this truly is because I can see the good in it, I just think that right now it simply isn’t for me, and that is totally okay.