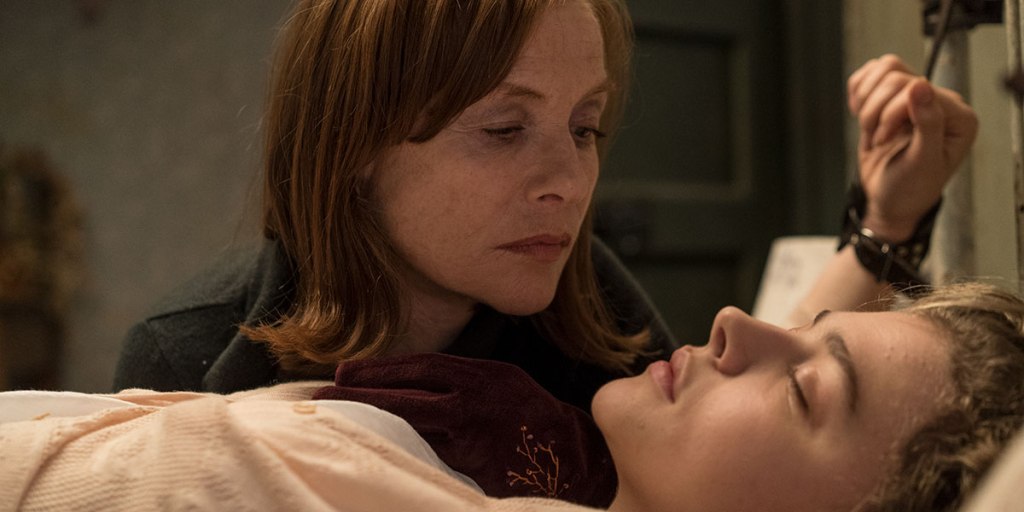 Isabella Huppert and Chloë Grace Moretz as Greta and Frances.

From it’s opening to the end, there’s something very 90’s about Greta. It’s a feeling that never quite goes away and gives the film a little thing that feels a bit out of place in today’s world. That doesn’t mean that Greta is a bad film, hell, I found it really enjoyable even with its faults. It just makes the movie a little thing that seems to have come out a little late. Thrillers like this were the norm back in the ’90s. Today, well, not so much. Yes, we still see thrillers happen today, but they never get the same attention that they had before. Most of them fade really quickly or are not considered great cinema. And very rarely do they get two great actresses like Chloë Grace Moretz and Isabelle Huppert as their leads.

Greta pulls you in from the very beginning. While I do think it sometimes overuses the music or score, I do believe that sometimes it uses it quite effectively. The story is quite simple, a young trusting girl finds a purse on the subway and decides to bring it back to its owner only to find herself at the centre of unhealthy obsession from the older woman. But what makes it great is the performances given by its two leads. Greta would have never worked without Huppert and Moretz. If they didn’t give the performances that they did, then the film would have looked very silly. Sometimes the dialogue doesn’t work on the page but when Isabelle Huppert delivers it, somehow it works perfectly.

Chloë Grace Moretz is one of those actresses that I think keeps improving. Just last year, she gave what I considered to be a career-best performance in The Miseducation of Cameron Post and with this, she shows a totally different range. Isabelle Huppert is less known to English speaking audiences, but as someone who grew up speaking French and has always watched French cinema, she has always been up there in my list of actresses that I loved. Seeing her playing an against-type character like this one is so satisfying and she is able to sell the slow reveal of how deep Greta’s psychosis go really well.

But, Greta starts to show its shortcomings when you look past the performances. The story isn’t always the strongest and sometimes repeat itself in plot points. While not very long, it somehow feels longer and starts to drag on in the middle. It’s not because it’s not entertaining but mostly because the film escalates quickly and then just become stagnant in the middle before escalating again. It runs out of air quickly and you can feel it, which is an unfortunate thing. Another thing that brings the film down is it’s more than ordinary cinematography and it’s overuse of score/music. It’s trying too hard at times with the music and mostly not hard enough with the cinematography that never stands out.

Greta survives its flaws because of the characters. It’s so rare when you watch a film in that genre that the leads are all occupied by women. But when you look at the three main characters of the film, all are strong women. You could look at Frances (Chloë Grace Moretz) as a weak character because she is the victim but she never feels useless. She always feels like that even when she isn’t in control, she could be. She doesn’t look like what the media portrays at the strong woman and yet she is. She is just a different type of strong and I loved that. I also loved that by the end, no man swoops in to save the day. The women of the film are allowed their victories, something that is so against this type of film.

Greta might not be revolutionary but it was an entertaining film with performances that brought everything together. It’s something that feels out of place but is a welcome when it comes to the genre and the twists it puts on the female characters that are usually sidelined. It’s a film that if you love the old 90’s thriller you will totally enjoy and reminisce about the old movies that you watched back then.

You can catch Greta in theatres starting March 1st.