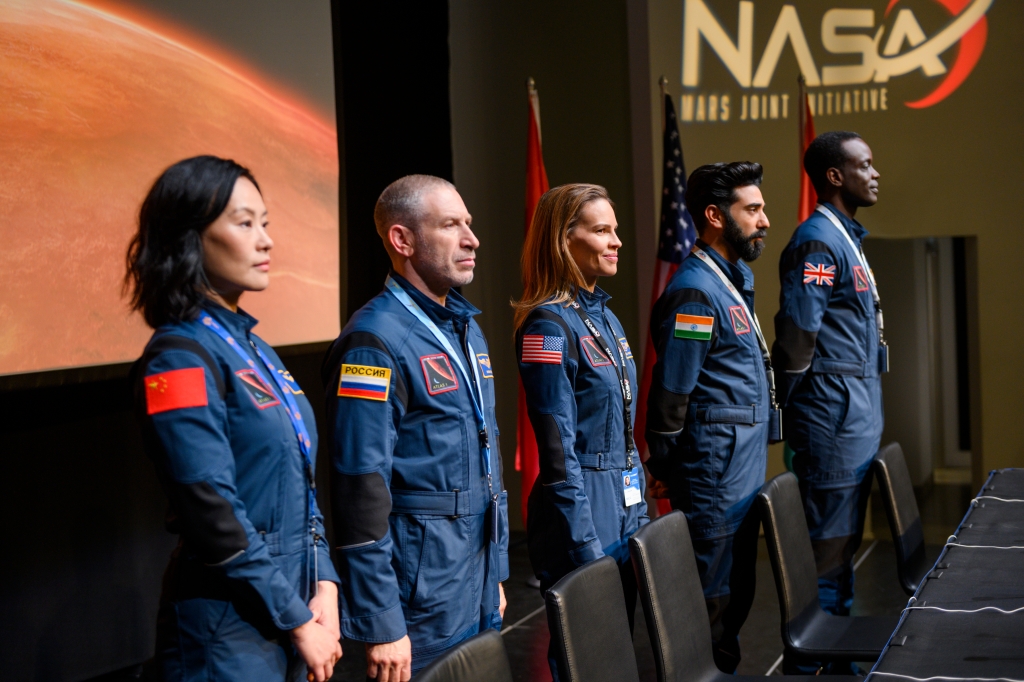 Sometimes just from a premise of a show, you just know something is for you. I usually navigate more towards comedy when it comes to television but sometimes a dramatic show will come and sweep me off my feet. Away comes from a team that I trust. Produced by Matt Reeves (Felicity, The Batman, Cloverfield) and Jason Katims (Roswell, Friday Night Lights, Parenthood) and starring Oscar winner Hilary Swank (Boys Don’t Cry, Million Dollar Baby), it had everything to succeed. My only concern was how one could sustain a drama set during a mission to Mars where most of the show would take place onboard a ship. Well, Away was capable of finding a way and make a show that maybe isn’t always on point but certainly shows it’s potential.

How can you maintain a show when most of your cast can only be in one location. While there are some stories set up on Earth, it honestly isn’t as interesting as what is happening in space. And that’s normal, the whole premise of the show is about a team going to Mars. But the writers were smart enough to find a way to intertwine the stories in a way that made sense for the show to come back to Earth and not stay with the space crew the whole time. Human interactions are something we all deal with and with the world in the state that it is right now, being stuck indoors, we are forced to interact with the same people over and over again. Away pulls a lot from that idea of relationships and being stuck in a confined space.

The best thing Away does is deciding to skip time fairly easily. Time jumps between episodes are normal, while it’s not years being jumped more like weeks or months, it brings something more to the show. Because of that, the show is able to advance at a rapid pace and not get stuck in one story. Skipping months mean that the mission moves quickly and the show can’t lose itself into trying to explain everything that happens. We have some exposition here and there to tell us what happened between two episodes but the show never feels the need to show it to us and I am grateful for that. Instead, the writers were able to pick and choose the best stories and make them fit for their characters, which means that for the most part, the plot points are strong and don’t deviate too much from its final objective.

The best aspect of the show remains it’s cast. Like always Hilary Swank as Commander Emma Green knocks it out of the park but she might be the star of the show on paper, that doesn’t mean that the show belongs to her. Ato Essandoh (Jason Bourne, Dark Pheonix) as Kwesi, Mark Ivanir (Schindler’s List) as Misha, Ray Panthaki (Colette) as Ram and Vivian Wu (The Last Emperor, The Joy Luck Club) as Yu round up the crew of the mission and those four paired with Swank makes for one strong assemble. I don’t know if I would be able to point out one bad thing about the five of them. The relationships, the events, the writing and acting, everything works in their favours. The way the show is composed each actor get one episode to shine where their characters are explored. It’s nothing new and it has been done so many times before, but Away has such interesting characters that it is easy to forgive.

Josh Charles (The Good Wife) and Talitha Bateman (Love, Simon) finish the cast but because their story took place on Earth and away from the main mission, I often found myself not really caring about what was happening with them. It doesn’t mean that their stories aren’t important, no they drive a lot of Emma’s conflict but I also found myself wishing to go back to the ship and the crew.

I wouldn’t be doing this show justice if I didn’t talk about the special effects and visual effects. We have seen some great movies take place in space, most notably First Man and Gravity, so I was a bit septic about a television show taking place mostly in space. Well, those doubts were unfounded because not once did the show fail at delivering. Some sequences that take place in space are simply breathtaking. Not only from a visual standpoint but also from how the show pairs it’s great visual with the sound and music. One of the best sequences takes place towards the show where two characters have to go outside the ship for a spacewalk and the show already delivered a spacewalk prior to that episode, so I wasn’t expecting to be blown away like I was the first time. But the show not only was able to deliver, but it also surpassed itself and gave us one of those shots that just kept coming back into my mind. And I think that is something Away knows how to do, it’s to give us those grandiose moments but also ground them into the day to day lives of humans.

Away’s premise sounds like it would make a redundant show. A group of astronaut going to a mission to space. But because the show decides to explore the characters more than anything, it’s able to go beyond its premise. It becomes a character study and makes us fall in love with this crew. By the end, you want them to succeed because you are invested and that is the best thing this show does.