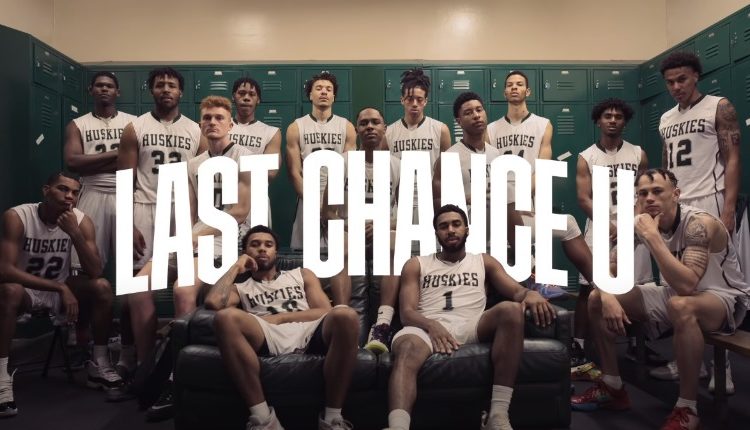 Netflix’s Last Chance U was one of those docu-series that I would watch and get so invested in it. The first instalments in the series followed teams at football players at JUCO colleges trying to get out of there and go play for a D1 school. What made Last Chance U work was the care and intentions from those behind the camera, the students that were chosen to be showcased, it was a character study but also had a hopeful message with it. After the fifth season aired, it was announced that the show would come back but this time with a new instalment, this time following basketball players at JUCO colleges. This time named Last Chance U: Basketball, the show might follow a different sport, but it still has the same heart it always had.

The first season of Last Chance U: Basketball follows the East Los Angeles College Huskies as they try to finally get to what they are simply missing, a state championship. Led by their passionate head coach John Mosley, the team is composed of former D1 recruits and powerhouse athletes who just want to prove themselves and show that they deserve another chance to fulfill their dreams of playing at the next level. But, like most documentaries coming out this year, what is supposed to be their season ends in a way no one expected.

It’s interesting to watch a documentary that centers around kids that most have given up on, kids that the world sees as damaged goods. Last Chance U has always been about showing that yes, they have made mistakes, but that sometimes they just need one person to believe in them for them to get out of their own ways. JUCO is the stop none of these kids want to have to do, but for multiple reasons, they have to. Whether it’s because of personal problems, problems with the law or even simply grades, Last Chance U doesn’t judge them. They expose their reality and tries to make us understand how they got there and how they can get out.

Last year, the basketball world was changed forever with the sudden death of Kobe Bryant in a helicopter crash that killed him, his daughter and seven others. It was an emotional moment for basketball fans around the world and because Last Chance U: Basketball follows basketball players in Los Angeles, Kobe meant a lot to a lot of these kids. For one full episode, we witness these kids mourn Kobe and say what he meant to them. I remember where I was when I heard that Kobe Bryant had passed away, I remember feeling lost and couldn’t believe that my basketball idol was gone. Seeing these kids explain how they couldn’t get up the next day, see them wearing their Kobe merch at practice, have shots of trash with the word Kobe on a piece of paper made the show so grounded because we might be in very different situations but in reality, we are similar. We love the same sport and had to mourn someone who showed us what basketball could mean and not only mourn his life but the life of eight others.

I don’t want to talk too much about the ending of the season because I know the pandemic will be a recurring theme in a lot of documentaries. The pandemic ends the show abruptly, their state championship tournament cancelled, forcing these kids to go into the unknown. The show doesn’t spend a lot of time on it, and it is better for it. We see the aftermath of it, where they all end and how they were able to continue to play and survive during the pandemic but the show doesn’t dwell on it. The story is always about the kids and coaches and the pandemic is simply another obstacle on their road.

What makes Last Chance U: Basketball work is the casting. These kids might have not followed the right path and have problems but the show knows how to showcase them the right way. Sure, at times Coach Mosley is a lot and I was getting very annoyed at him, but when you see how some of the kids are and how they react it isn’t hard to understand. Last Chance U has always been about showing the humane side of people, how sometimes your past doesn’t define your future, that it just takes one person to believe in you for you to be able to get out of your own way. It’s one of those shows that has you rooting for them and hoping that at the end when the epilogue arrives that they all achieved their goals and got out of JUCO and are on their way to a better life.